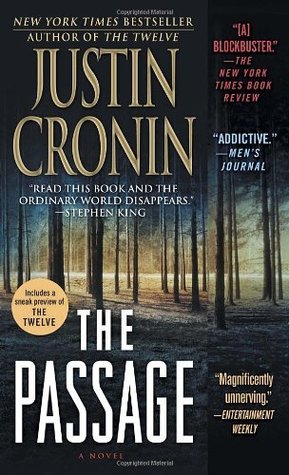 Justin Cronin’s The Passage (the first book in “The Passage” series) is a novel on an epic scale and not a book to go lightly in to.

A government experiment goes horribly wrong and brings about a catastrophe on a massive scale.  Somehow, a six-year-old girl named Amy holds the key to recovery.  The catastrophe in question has metamorphosed twelve men who once sat on death row, into vampire-like monsters.

After the initial outbreak, life in the United States changes (out of necessity).  The population, having been devastated, loses much of its technology and among the few people left alive, small communities band together for safety.

The first third of this very long novel was extremely interesting and full of adventure.  There were a great many characters being introduced and the mystery of how these character would ultimately interact with one another was exciting.  The collapse of civilization … of humanity … was well told and of high tension.  It would have been worthy of being the denouement of most thrillers.  But The Passage had another 500+ pages to go.

The last third of the book brings about a tremendous conclusion, tossing in some characters that we might have forgotten about and a long-awaited, long-teased face-off between human survivors and the ‘virals’ (humans turned vampire through virus infection).  When I reached a certain point, I didn’t want to stop reading — I was so excited to turn the page and see what would happen next.

But the middle portion of the book … nearly 200 pages … draws on.

After the collapse of society, author Cronin needs to set up a whole new cast of characters and set up the brave new world that the characters live in.  Essentially we have two beginnings to the book, the second beginning much slower, establishing a pace that reflects the lifestyle of the survivors — though by this time we have children of the survivors.  But life is different, without all the technology, and communal living behind walls and with bright lights at night to keep the virals away.  It is a slower, more day-to-day life.

But slowly, as we get to know the new cast of characters and they begin to face a new reality, they are forced to leave the safety of their home and seek answers.

This part of the book, this second beginning, is necessary to tell this epic story, but it drags down the story as we wait for the two beginnings to merge.

For 500 pages (the beginning and the end) we have a nail-biting epic that will have you curious and eager to dig in to the next book.

Looking for a good book? The Passage is an epic novel of a dystopian future that is rooted in a very believable catastrophe.