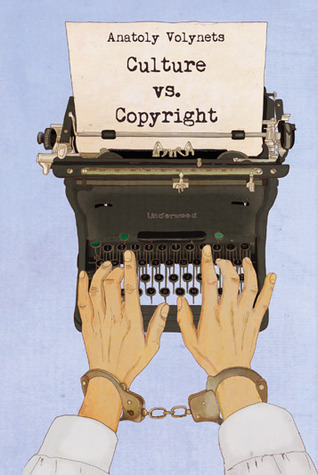 Author Anatoly Volynets waxes on his thoughts on a preferred means of ‘protection’ for works of art, claiming that copyright hinders art (which in turn hinders the advancement of culture) and serves only large corporations that can publish (or deny the publishing of) the art.

There are so many things wrong with this book that it is difficult to know where to begin.

I’ll start with the fact that I am immediately distrustful and wary of any work that is propagandist writing, which I believe this to be.  So what, exactly makes some non-fiction simply persuasive writing and some propaganda?  I’ll get to that in a bit.

Secondly, Volynets couches some of his ideas behind the expressions of first graders.  Clever, since we know that ‘out of the mouths of babes’ can come some wonderful insight.  But is Volynets really suggested that the ‘protection’ of art should be through the means and methods suggested by first graders?  First graders who have such a wonderful grasp of supply and demand and the need for artists to pay their rent?  (I write that with sarcasm…please read it the same way.)  And just who are these first graders who speak like this (note: the first graders are identified as ‘Alpha’ ‘Beta’ “Gamma’ ‘Kappa’ and ‘Delta’) :

Alpha:  All right.  But he won’t pay much because any advantage expires at the moment that the work gets out!
Beta: Hey, Alpha, if you understand business so well, why don’t you use your imagination a bit more?
Alpha: I take that as an insult.
Kappa: Cool down, guys.
Delta: Hey, hey, I get it! The publisher may pay the artist very well so that he keeps the work inside!
Alpha: So what” It gets outside when it gets published anyway!
Delta: So what yourself! The first is the first! Customers value that! This is how a brand develops! It pays, all right.

Anybody out there know any first graders?  Do they really speak like this?  Talk about ‘brands’ like this?  Personally, I think they are probably reading the Berenstain Bears, and playing four square, and not talking about business and art as if they were miniature Aristotles.

And then there’s the subject matter.  Voynets is dead sure that copyright is wrong and “authoright” is the only true future that will protect the artist, enhance culture, and still make money for big business.  Pie-in-the-sky dreaming is fine, but he pretty much bases all his arguments on one or two theories, writes about them as if they are fact, which sounds good at first, but if you actually stop to think about them, or actually look at his reasoning, it all falls apart.

In ‘authoright’ mode, a writer (we’ll use writer, though Volynets claims that this would be true for any artist, musician, dancer, etc) can sell his work as many times as he wants.  In fact, once it appears publicly, it is then available for anyone to use, providing they credit authorship.  This will create exposure to the artist and actually prohibit theft, according to Volynets because it will already be ‘out there’ with the author’s name on it.  This is a fairly simplistic explanation of Volynets’ theory, but I believe I have it in a nutshell.  And, just as his first graders suggest, the big publishing companies will spend good money on it, making the author a handsome sum because the publishing houses will want to create a brand by being able to announce that they are the first to publish a specific author.  We writes, flat-out: “Publishers will compete for the ability to get the next one first.” (Page 97 of my copy.) And while this is written as though Volynets knows this to be a fact, no where does he indicate what research or conversations he’s had with publishers to come to this conclusion.

Does anyone else see any problems with this?  Does anyone else foresee that the giant publishing houses…those who can afford to mass produce on a cheaper scale, will wait for something to suddenly be ‘out there’ and print it cheaply so that they can sell it for less but sell many more of them, thus making a lot of money for themselves, laughing at the schmucks who shelled out good money just to be ‘first’?  Can you say “Wal-mart”?

It’s actually pretty easy to punch holes in Volynets’ arguments, but that’s not the purpose of this review.  Let me address the writing style….

I referred to this as propagandist writing.  To me, the difference between writing an essay or a philosophic musing, and writing propaganda, is the way in which the ideas are couched.  At one point it is pointed out that the authoright format that is being discussed takes place in an ideal world, and truly everything written about the authoright format is written in the best light and everything that Volynets associated with copyright, he chooses the worst possible outcomes for his examples.  Even the language that is used is extremely contradictory, with anything referring to copyright written in harsh, negative language, while everything written about authoright is written in a positive way.  For instance, Volynets sums up copyright with these sentences:

A toxic copyright-driven environment pressures a creator to give to the tastes of publishers. … In this monopoly-based environment, any work of art may disappear unnoticed, regardless of how brilliant it is.  High prices suppress the book …

“Toxic.”  “Pressures.”  “Monopoly.” “Disappear.”  All words that immediately put the reader in a negative frame of mind.  On the other hand, when summing up authoright:

The author will be paid a certain amount of money.  If the sum is considerable, there is a happy ending. … If the publisher wants exclusivity (until the work is published) he may pay more. … Does second-hand publishing provide any incentive to the author?  It can.  For example, if a publisher wants to develop a brand, he may pay the author to be the author’s announced sponsor. Will just any publisher do this? Some will, for this marketing idea is not worse than any other.

“Paid.”  “Money.” “Sum is considerable.”  “Pay more.” “It can.” “He may.” “Some will.”  Positive impressions even though they are based on suppositions and the fact that the idea “isn’t any worse than any other” (perhaps my favorite reasoning in the book, which is still good for a chuckle).

The point here is that the ideas aren’t really strong enough to stand on their own (and the number of ideas that support the basic tenet are quite limited and we keep coming back to ‘brand’ and the fact that the author can sell his works multiple times because publishers will want to publish works multiple times) and so Volynets tries to sway the reader with the writing, using positive reinforcements for his ideas and negative reinforcement for the established methods.

Fortunately, many people can see through this.

But of course Volynets has set himself up by establishing early that if you disagree with his reasoning it is not because of any fault on his part but because the readers are ‘accustomed to the current publishing industry’ and ‘unlikely to agree with Volynets’ expectation that authors will somehow increase their earnings’ because they lack an open mind (see the book description on Goodreads).  I did go in to this with a completely open mind, but it struck me early that the author was  the one without an open mind by not comparing the perfect world authoright with the perfect world copyright, or truly addressing the negatives of authoright (the one time he brings up the idea of theft because of authoright, he quickly sweeps it under the rug with “this does not change the situation much…”.

I received an electronic copy of this book from the publisher, through Edelweiss, in exchange for an honest review.