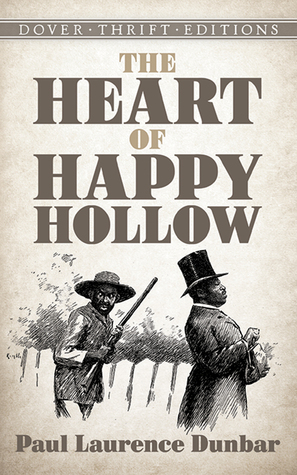 It is wonderful that Dover Publications is putting out this ‘thrift edition’ of a remarkable collection of short stories by Paul Laurence Dunbar.

Dunbar was the son of freed slaves and this collection of stories looks at the behavior of men, both white and black, in the post-Civil War era.  At times, the reading is hard going as Dunbar writes, phonetically, the dialect of the Southern black man at the turn of the twentieth century.  There are those readers who may accuse the author of stereotyping and insulting the reader by this, but Dunbar is simply capture the language of the time, place, and person.

I was particularly moved by a story which begins:

GORDON FAIRFAX’S LIBRARY held but three men, but the air was dense with clouds of smoke. The talk had drifted from one topic to another much as the smoke wreaths had puffed, floated, and thinned away. Then Handon Gay, who was an ambitious young reporter, spoke of a lynching story in a recent magazine, and the matter of punishment without trial put new life into the conversation.
“I should like to see a real lynching,” said Gay rather callously.

The story, “The Lynching of Jube Benson,” is sure to strike the reader with its casual-ness of such a horrid topic, but also by the impact it has on the characters involved.

I was also struck by “The Scapegoat” — the story that opens this collection and sets the tone for the sort of lessons the reader may learn, and “Cahoots,” which was funny and touching.

Really, all the works in here were a surprise to me and delightful.  I’ll admit to a bias and say that I tend not to expect much from literature at the turn of the century, and someone who is the son of slaves — well, I would expect a great mastery of words.  Why?  I can’t say … just an irrational expectation.  So it is doubly delightful when I can be surprised in such a pleasant way.  All throughout this book I was caught by surprise by a turn of a phrase or a reflection that spoke to the heart of being human (“The story flew like wildfire, there being three things in this world which interest all sorts and conditions of men alike: great wealth, great beauty, and great love.”).

I knew nothing about Dunbar when I requested this book.  I came to this from a historical point of view, initially, but have become converted to the power of Dunbar’s writing and I’ll be seeking out more of his works.

Note
Foreword
I – The Scapegoat
II – One Christmas at Shiloh.
III – The Mission of Mr. Scatters
IV – A Matter of Doctrine
V – Old Abe’s Conversion
VI – The Race Question
VII – A Defender of the Faith
VIII – Cahoots
IX – The Promoter
X – The Wisdom of Silence
XI – The Triumph of Ol’ Mis’ Pease
XII – The Lynching of Jube Benson
XIII – Schwalliger’s Philanthropy
XIV – The Interference of Patsy Ann
XV – The Home-Coming of ’Rastus Smith
XVI – The Boy and the Bayonet

Looking for a good book? The Heart of Happy Hollow by Paul Laurence Dunbar is a wonderful collection of stories, from a black perspective, of America just after the Civil War, and speaks to ALL races of men.

The Heart of Happy Hollow