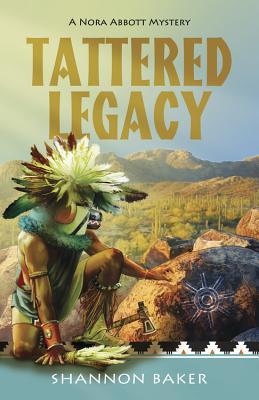 So… it was only just now, as I went to Goodreads to grab the URL of this book’s cover to paste into the blog post, that I discovered that this is the third book in the Nora Abbott Mystery series.  This surprises me (pleasantly so) because, while it was clear that Nora had a well-developed history and back story, I never felt that I was missing out on some vital piece of information.  This is precisely the way a ‘series’ of books should be … that I can pick up any book and get a complete story.  By reading all of the books in a series, I get a lot of individual stories but also a large character arc as we see the character(s) grow).

Nora Abbott appears to be an environmentalist with a strong connection to Native American mysticism.  In Tattered Legacy, she is in Moab, Utah where her friend Lisa, who was making a documentary on the importance of saving (and expanding) Canyonlands National Park, is killed.  It seems pretty clear that Lisa was killed because of her work (the tapes were destroyed) and Nora can’t help feeling that one of the local families is behind it.

Politics, religion, environmentalism.  Somehow, author Shannon Baker weaves these threads together in a marvelous way, keeping the reader guessing, and masterfully leading us to make conclusions that are often wrong.  This story is built quite carefully, with revelations coming very naturally and unexpectedly.  Shannon Baker is a very talented story-teller.  I absolutely loved how the story was revealed.

What drew me to this book was the setting.  I absolutely love the American Southwest.  The entire area, from Grand Canyon to Petrified Forest to Arches and Canyonlands, Canyon de Chelly to Mesa Verde, has long been a favorite of mine.  And ever since a course in college on Native American literature, I’ve also been fascinated with Native American mythology/legend/religion.  And this book has it all.

The mystery is strong, the setting is great, and the story-telling builds tremendously, with a good deal of character growth.  And how fabulous that author Baker even manages to weave in the great environmentalist Edward Abbey by naming the dog after him.

Only once did I pause in the reading and shake my head at some much-too-naive naiveté.  In a great climactic moment, Nora’s brakes go out on her car.  Though nerve-wracking, Nora manages to keep a level head and guide the car, roughly but safely, across some rough terrain and into some sand to stop the car.  A friend has been killed and Nora has clearly ruffled some feathers by this point and Nora’s mother, who was in the car with her, says:

“My god!  We could have been killed! … I told you two years ago to get a new car.  But no, you didn’t listen.  You aren’t happy unless you’ve got the oldest car on the road,” her mother ranted. … “It is irresponsible of you to have held on to this antique this long.  At least now you’ll have to get a new car,” her mother continued.

I have a difficult time believing that the mother … anyone … didn’t immediately assume that this was an intentional attack on Nora, but rather Nora’s fault for having an old car.  It’s the only moment in the entire book that didn’t feel right.  But with such a great setting and descriptive language such as: ‘He spoke as if each word formed from the sands of time and baked in the sun.’ — you know you’re going to be in for a good time.

I assumed that there would be other Nora Abbott novels, but am thrilled to learn that there are already two more available and I look forward to getting a hold of these, and Baker’s other works.

Looking for a good book?  Tattered Legacy by Shannon Baker is a well-written, intensely provocative mystery set in the American Southwest.