THE H. A. REY TREASURY OF TALES – H.A. Rey and Margaret Rey 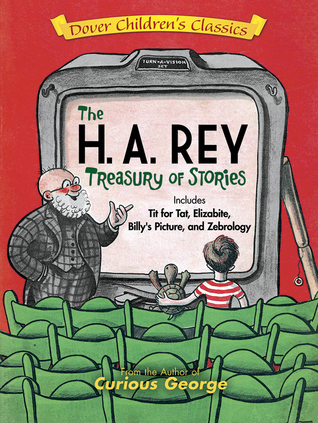 How many people who are readers today did NOT read the Curious George books when they were young?  Not too many, I would guess.   But how many of you are aware that the creator(s) of Curious George wrote and illustrated other children’s stories as well?  The H.A. Rey Treasury of stories features four short, illustrated stories for children by H.A. and Margaret Rey.

The first story, “Tit for Tat,” is a short little parable to get children to be kind to animals by turning the tables.  If offers a ‘what if/do unto others’ idea.  For instance, first we see a horse pulling a carriage and then we see a human pulling the same carriage, with the horse riding.  It actually gets a little ‘dark’ as we see a mouse caught in a mouse trap and then a woman with her hands caught in an over-seized mouse trap while a crowd of mice cheer in the tit for tat.  There’s also a fox wearing a human stole and a caged man singing for canaries.  The point is definitely delivered with some pretty strong images.

The second story, “Elizabite: Adventures of a Carnivorous Plant,” reminds me of a child’s version of “Little Shop of Horrors” in which a small carnivorous plant has a habit of biting people and pets that get too close.  It does manage to foil a robbery by nearly eating a burglar.  To protect the plant, and the people around it, it is finally put in a zoo.

Just like “Tit for Tat,” “Elizabite” tends to be just a bit on the dark side.  For those of us who grew up with Grimm’s and Andersen’s fairy tales, dark is just a part of story-telling.  In today’s politically correct world, these might not fare quite as well.

The third story is a bit smoother and kinder.  In “Billy’s Picture” a little rabbit, Billy, is wanting to paint a picture of himself.  Along comes a friend, a puppy, who adds to the painting, but the painting looks like a cross between a rabbit and a dog.  Then comes a goose, who also adds to the picture, but the picture becomes a cross, now, of a goose and a dog, and a rabbit.  This story is simple and goes on and on with a new animal coming in and changing the picture each time, until it is completely unrecognizable.  Finally Billy gets angry and tells everyone that all he wanted was to paint a self-portrait.  The story ends happily, with everyone painting their own self-portrait.

The final story is my favorite.  “Zebrology” is a story without words, about the history of how zebras came to be.  It’s delightful, cute, humorous, and precisely the sort of story I would have loved as a child (I would have gotten to make up my own story to go with the pictures) and would have eagerly read to my children.

This feels a little thin to be called a ‘treasury’ but the four short stories within are delightful throwbacks to a very different era in children’s picture books, and aside from the historical interest and the curiosity point of view, these stories could still be read to, and be entertaining to, children.

Looking for a good book? The H. A. Rey Treasury of Stories is a nice look at some of the other works for children by the creator of Curious George — some a little ‘dark’ but all of them entertaining.

I receive a digital copy of this book from the publisher, through Netgalley, in exchange for an honest review.

The H. A. Rey Treasury of Stories