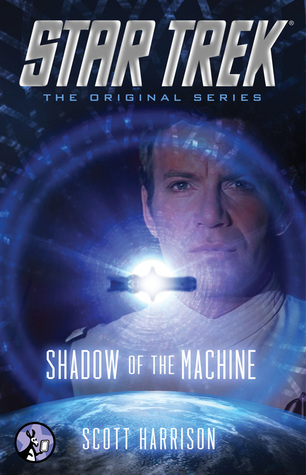 Star Trek fiction is my comfort blanket.  This is what I read when I’m looking to read something that I don’t have to think too hard about but will typically satisfy.  I think most people have something they like to turn to for comfort reading, whether it is religious or romance or scientific journals.  I’ve thought about why I like ST fiction and I think it’s because the characters are not only already very familiar to me, but beloved as well.  I know how they should act and react and speak, and as long as the author keeps pretty close to how I picture it, then I’m generally willing to take the ride and learn something ‘new’ about the characters.

The Star Trek line of books has likely done very well by Simon & Schuster/Pocket Books and they have very cleverly discovered that they can produce shorter books, novellas, and sell them digitally, because people like me will pick them up (and because they are digital and short, they are typically less expensive as well).  Shadow of the Machine, by Scott Harrison, is one of the latest in this novella e-book trend.

The events in the book occur just after the first ST movie, Star Trek: The Motion Picture (you know…the movie with the really bad costume designs and the focus on special effects rather than story…).  The Enterprise has returned to dry dock for retrofitting before continuing on with its mission.  The crew are granted shore leave, but some, particularly Kirk, Spock, and Sulu, are haunted a bit by their encounter with V’ger and need to do a little soul-searching.

That is the action of this book.

Now…most any ST fan will tell you that the draw to Star Trek is that it isn’t an action series (at least not originally, though the spin-offs and reboots certainly are), but a series about stories of people and a look at what humanity is all about.  And this is certainly true.  But action doesn’t have to mean fist-fights and chases and shoot-’em-ups.  It means something has to happen.  What we get here is insight into the characters, which I really appreciated.  I was especially interested in the take on Spock and his return to Vulcan to put to rest his ‘kolinahr’ — an ancient Vulcan ritual most of you are already familiar with based on your interest in Star Trek.  This was action.  There were intentions and results and, as I say, some nice insights into the character’s background, as well as on his family.  This alone gets the stars I give this book.

Kirk’s story has less interesting (he visits his family and gives his nephew Peter a much-needed talking-to and a boost of confidence).

Sulu’s story is … well, there was potential, but it never got off the ground (pun intended).  Sulu is about to become a father (HUH?!) and he agonizes over this fact since he won’t be there for the birth of the child since he’ll be leaving with the Enterprise in two weeks.  First, I was completely thrown off by Sulu having a child (I must have forgotten or missed something in the ST universe) and, as a father, his reactions just don’t really seem appropriate.

The characters were typically well-defined and the new insights were good, and Harrison even does a nice job over-coming the aspect of following up on an existing story that is typically far from a fan favorite.  But the lack of anything happening, really brings the short book down.

Looking for a good book?  Star Trek fans will appreciate some character insight in Scott Harrison’s Shadow of the Machine, but nothing much really happens within.

Shadow of the Machine