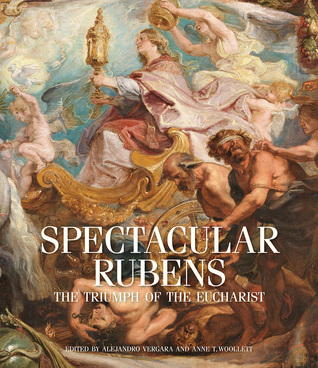 I will admit that when I started this book, I was expecting it to be more of a coffee table style book, full of pictures, but it’s not.  While the book is lavishly illustrated, it is not in a coffee-table display sort of way.

Spectacular Rubens is very specifically about a special series of paintings (and tapestries) designed and painted by Peter Paul Rubens (1577-1640) referred to as “The Triumph of the Eucharist.”

I can’t say that I’m particular familiar with Rubens.  Like most who recognize the name, I know he tended to paint larger (or “plus-sized”) women which has led to the term “Rubenesque” for chubby ladies.  Beyond that, I couldn’t tell you much (which is sad, considering my appreciation for art).

This book takes a detailed look at Rubens’ plans and sketches for a series of six scenes painted on large panels.  The paintings were also used as a design source for tapestries.  We learn about the degradation of the paintings and the efforts taken to restore the works (highly detailed).

I learned something that wasn’t a specific goal of the book … I learned that I want to study Rubens more.  That his sense of play and spectacle is as much of interest to me as his craftsmanship and artistry.  I was completely enthralled with Rubens’ concept of having cherub/angels holding up painted backdrops behind the characters of the paintings.  Sometimes that backdrop would cascade off the stage and out of the picture.  But it was almost as if Rubens was suggesting that he wasn’t painting scenes of the Eucharist, but that he was recreating a staged recreation of the Eucharist.  It is just the sort of thing I enjoy thinking about!

Spectacular Rubens is certainly targeted to a small, specific audience, but it is generally well written and well researched, and anyone looking to specific information about this particular work of Rubens will be very pleased.

Looking for a good book?  This detailed look at the creation and restoration of artist Peter Paul Rubens’ “The Triumph of the Eucharist” is worth reading for anyone interested in art and art restoration.

Spectacular Rubens: The Triumph of the Eucharist Series