NOTHING BUT THE CLOUDS UNCHANGED – Gordon Hughes and Philipp Blom, editors 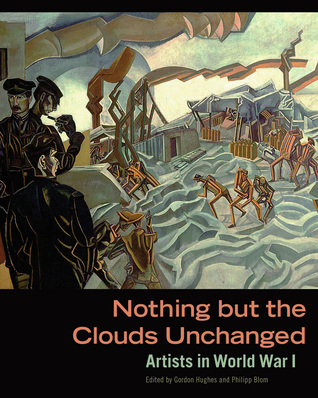 I believe that time and time again, artists have created some of the most thought-provoking, moving art during times of war.  Not just art as in paintings and drawings and sculpture, but all the arts … music, theatre, dance, etc.  This is not a call for war so that we can produce significant works of art.

In conjunction with an exhibit, the Getty Research Institute has produced this book, Nothing but the Clouds Unchanged: Artist in World War I,  which takes a look at the physical and psychological effects war has had on a variety of artists.  The “war to end all wars” changed hundreds of thousands of lives and brought a whole new horror to the world, and the artists represented here shared that horror in the only way that each could.

Editors Gordon Hughes and Philipp Blom have separated the book into two parts so that we can experience the war through the eyes of the artists from both the Allied Powers and the Central Powers points of view.  Each article is written by a different person and draws from the artists’ notes, letters, drawings, paintings, and comments from fellow soldiers.  We learn (as much as is possible) how the war impacted these people and we get the bonus of seeing how they interpreted these reactions in their art.  It’s a truly fascinating look at our society and our abominations.

Surprisingly, and somewhat embarrassingly, I was not familiar with most of these artists.  In general, I think that I found the Central Powers artists to be the most moving, and typically dark and bleak.  However, two artists with whom I was slightly familiar but couldn’t have told you much about were Georges Braque and Wyndham Lewis, part of the Allied Powers.  They both caught my eye with their work and their stories.

There is a nice variety to the art and artists represented.

I have, for a very long time, been a fan of the dadaist/surrealist art movement (which came about as a result of WWI), and as such, have also been quite a fan of artist Max Ernst.  Ernst is represented here, but I found it strange that, rather than some of his remarkable paintings, it is his collage/sculptures that are displayed (there is one painting [Towers] and three sculpture/collages included).  Had I not already been familiar with Ernst, this book would have given me a completely different impression of him and his work.  Which makes me wonder about some of the other artists.  Does this book accurately reflect their work?

All in all, this is a wonderful look at history and war through the eyes of artists who are able to convey their concerns and fears through art.

The book is made up of the following:

Looking for a good book?  Nothing But the Clouds Unchanged is a book that will appeal to art and history students.

Nothing but the Clouds Unchanged: Artists in World War I