ALL OUR YESTERDAYS – Cristin Terrill 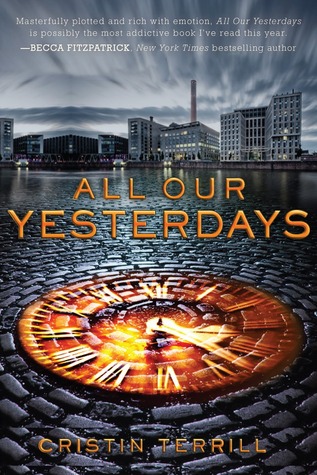 Lots of stars on Goodreads, and so many praise-raving reviews, I really expected to sink my teeth into this one, but sadly it was just another YA moan-fest with an interesting twist.  (Uh oh…I think I just earned some angry feedback!)

The story:  Em and Finn are in prison.  Despite being spunky teenagers, they out-smart the prison guards and escape, to travel back in time in order to destroy the time machine that they use to travel back in time to destroy the time machine.  This is their fourteenth attempt.  Of course it’s not as though the guards have been fooled fourteen times… it’s new each time it happens, although only Em seems to be able to remember anything from the previous attempts to change the course of the future.  This time they are intent on killing the doctor who created the machine, James.  Except…James and Em were childhood friends and despite feeling she’s tough, Em might have trouble pulling the trigger on someone who is still ‘innocent’ (in the past), despite what he will go on to create.

Yes, I get a thrill out of reading these kinds of paradoxical stories.  Author Cristin Terrill does a good job of navigating these tricky waters (though I still don’t think anyone has done it [write about time travel paradoxes] better than David Gerrold in The Man Who Folded Himself) and the science fiction aspect of the book was right on target.  But because it’s a YA novel, there is the requisite angst and budding romance, which I felt just got in the way of a good story.

“Em” is just exactly what you might expect from a teenage heroine.  She’s a little bit like Katniss Everdeen from The Hunger Games, and a little like Tris from Divergent, with a touch of Hermione Granger thrown in.  I’d really like to see a heroine who is different.  (Actually, I have seen a heroine who is different, and still strong and likeable … Lucy Carlisle from Jonathan Stroud’s Lockwood and Company books.)  And ultimately I think that this is the biggest problem with the book … there’s nothing ‘new’ here.  The characters are a YA pastiche.  Most YA readers probably haven’t invested themselves in too many time-travel stories, so the general story is of interest.

Giving the characters different names for themselves (“Em” is also “Marina”) was confusing for a while and actually almost backfired, for me.  I never thought of them as the same person in (or from) a different time and I had to work much harder keeping the characters, and when they were from, straight.

This is an interesting book with come classic science fiction themes, but it doesn’t rise above the very plebeian YA characters.

Looking for a good book? All Our Yesterdays challenges with its science fiction time-travel theme, but has some rather typical characters.

IT HAPPENED ON BROADWAY – Myrna Katz Frommer and Harvey Frommer 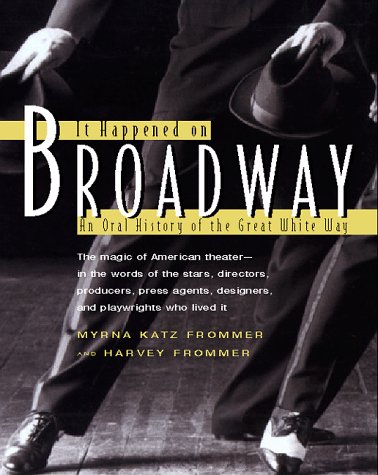 Anyone who has even the most rudimentary interest in the theatre will like this book.  Note that this is a paperback re-issue of the book originally published in 1998.

I’ve longed decided that theatre people, more than any other group of people or profession, live in the past.  There are always stories to tell about things gone wrong or things gone extraordinarily right, and because we’re often not sure what (or when) the next job is going to be, the jobs we have had are most of what we have to talk about.  In many ways, that’s precisely what we have here, except that those telling some of these theatre stories are people who have inside scoops on some of the most famous people and most famous shows in the history of Broadway.

Every story in here was new to me and every moment was interesting.  Editors Myrna Katz Frommer and Harvey Frommer have done an excellent job of gathering stories from some of the top names in the business and with only a few small exceptions, none of these stories had an air of superiority but were rather quite down-to-earth (this is not always the case when ‘stars’ tell stories from their early days).

This is a book every theatre geek should have on his or her shelf.

Looking for a good book?  It Happened on Broadway is a delightful reflection on some of the early days of theatre’s mecca, often told by those who made it happen.

It Happened on Broadway: An Oral History of the Great White Way

Posted by Daniel on January 1, 2015
Posted in: OTHER, Uncategorized. Tagged: random thoughts. Leave a comment