GIRL ON A WIRE – Gwenda Bond 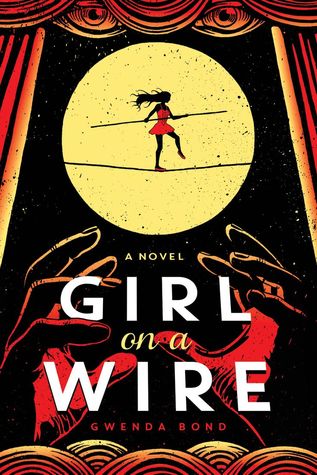 I’m a sucker for the circus and there have been some very good books that use the circus as a location or character.  Gwenda Bond’s Girl on a Wire is one of the latest circus books.

Jules Maroni is the sixteen year old tightrope walking member of the Amazing Maronis…a familiar name in the circus.  The Maronis have just joined Cirque American and Jules looks forward to doing what she does best..walking the tightrope.  Jules never falls.  Never.  And it’s possible that she will garner the coveted position in the performance line-up.  But there is one problem: The Flying Garcias.  The Maronis and the Garcias don’t get along.  And to top it off, someone is sending talismans of bad luck to Jules and it has her rattled.  Enough so that she actually falls during a practice and has a panic moment during a performance.

With the help of Remy Garcia, for whom Jules has developed an affection, Jules will look for answers as to who is trying to scare off the Maronis; and just where the troubles between the Maronis and the Garcias began.

This is a modern Romeo and Juliet story (sometimes a little too obviously so: “Remy & Jules”) and for the most part, it works.  This is one of the few Romeo & Juliet variations I’ve read where the warring families’ distrust and dislike for one another actually seems believable.  The mystery aspect to the story is very good and piqued my interest.

The circus life is attractively portrayed.  Attractively … not necessarily accurately.  And that’s okay.  This is a mystery/romance and romanticizing the circus is okay.  We’ve all done it, which is why ‘running away with the circus’ is a literary trope.

I enjoyed Jules’ exploits on the wire and I wanted more of it.  Gwenda Bond captured the internal feelings of an artist at work, as well as an artist in trouble, and i really wanted to spend more time in these moments.

I also appreciated that this was a YA novel without the abundance of YA pathos and brooding — although there was the obligatory death (but it’s “Romeo & Juliet” so there has to be at least one death, right?).  I liked the secret simplicity of the Remy&Jules relationship.  When it became known to more, it became less interesting.

Overall, a good book and one that should do well with the teen readership.

Looking for a good book?  Girl on a Wire by Gwenda Bond soars.

Girl on a Wire