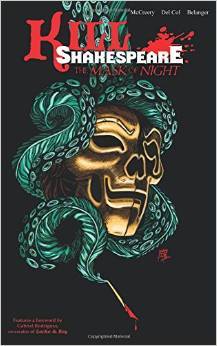 What is happening to the Kill Shakespeare series?  I feel as though there is nothing to review here with this issue.

Hamlet, Juliet, Othello, and Shakespeare are on a ship, Captained by a masked Cessario whose first mate is Viola.  Cessario and Viola and crew appear to be pirates, but pirates who are afraid of another ship, captained by Titus Andronicus (okay…I’d be afraid of that ship, too).  There are some battles aboard the pirate ship and … well … that’s about it.

Previous books have followed more than one storyline and sometimes leave the reader breathless as the story whips and winds around, and there are sometimes so many different characters in play that you need to have your Shakespeare Spark Notes at hand.  But this volume slows it down…way down.  Which is a bit odd since they are racing away.

Although Othello is on the ship, we tend to only see him when we need a break from the monotony of dialog and he comes up, raging, out of his mind.

In Volume 3, we saw Hamlet, Juliet, Romeo, and Othello head to Prospero’s island for battle.  Now,fleeing and captives of Cessario, it seems that they have become pawns to others who are much less powerful (and less interesting) than Prospero.

The art is still fair.  More vibrant art may have enhanced this rather dull story.

This book feels like ‘filler.’  As though everyone involved needed some time off and tossed together this volume.  I hope it picks up again very soon.

Looking for a good book? If you’ve been buying the Kill Shakespeare series, you’ll want to get this to keep your collection together, but if you don’t pick up this book, you won’t be missing out on much.