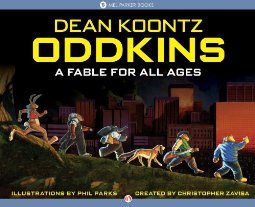 Initially I was going to refer to this as a dark version of Toy Story.  But Toy Story is actually pretty dark.  Instead, I would call this Toy Story with an edge.

Isaac Bodkins is an old toy maker who specializes in toys for special children who face extremely difficult lives and need an extra special friend.  The toys are called “Oddkins” due to the special living nature and the play on the toy maker’s name.  But Bodkins passes away before he can turn over the toy factory to his intended heir, Colleen Shannon.  Bodkins does, however, manage to appoint one of the Oddkins, Amos, as their leader and warns them to watch out fo the evil toy maker.  And so, on a dark and stormy night, Amos leads his fellow Oddkins to find Colleen while a plot is under way to get control of the toys and the factory by the evil toy maker.

For those who are familiar with Dean R. Koontz, this is a tremendous departure from his horror novels, though you can see the ‘darkness’ that will come out in his later books (this is a reissue from the 1980’s).

The illustrations by Phil Parks are wonderful and do a lot to help remind us that this is intended as a children’s book.  The pictures are very picture-book-appropriate.

But this does raise a question… for whom is this book intended?  The thread-bare plot and simple story line and morality lessons, suggest that it is for younger readers, but the darker themes and the longer narrative would suggest this is for older readers.  I found the middle portion of this to be dull and plodding, though there were snippets of something intriguing, which is what kept me going.

While I do think that younger readers are more open to darker themes and storytelling now than they were 30 years ago (thank you, Neil Gaiman!), it still seems a little odd (no pun intended) to reissue this book.

Looking for a good book?  Oddkins is a children’s story reissue that you may enjoy reading once, but doesn’t have much re-read potential.

Oddkins: A Fable for All Ages