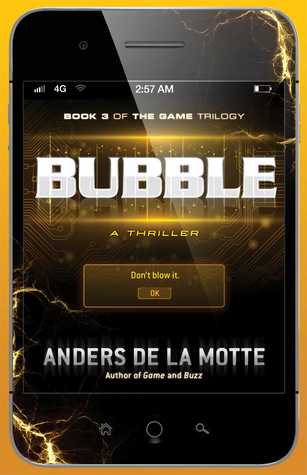 Finishing off the trilogy that was started with Game, and followed up with Buzz, Bubble wraps up some loose ends and sees a conclusion to ‘the game.’

The first book, Game, started off quite well, but Buzz didn’t meet with expectations or even pave the way for the final book.  Bubble follows Henrik “HP” Petterson, living off-the-grid, as he works with a group of former Game players to seek out the Game Master and bring an end to the Game, while HP’s sister, Rebecca Normen works her way back into a security force which is charged with protecting a Swedish princess at her up-coming wedding.

Although author de la Motte tries to continue misleading the readers with some red herrings as to the Game Master’s true identity, it comes across a little heavy-handed.  So much so, that it was clear, very early, that it most-likely wouldn’t be the person de la Motte was presenting.

One problem I’ve had with the entire trilogy is the relationship between HP and Rebecca.  It’s completely acceptable to have a brother and sister with a dysfunctional relationship, but this relationship is beyond dysfunctional.  There seems to be no reason to have these characters related, other than an attempt to create a little more conflict, specifically with Rebecca.  This attempt is forced and never feels believable.  I can buy into the idea that they aren’t close, but at the same time we have to accept that they are close enough to look out for each other.  De la Motte switches points of view between Rebecca and HP quite a bit.  We can presume that the stories will intersect, and yet despite this switching back and forth and the fact that they are siblings, they have no contact with one another through the bulk of the book.

Playing a bigger role in this book are some of the secondary characters from the first two books.  I most definitely was interested in both Uncle Tage and HP’s friend, the enigmatic Mange.

Neither Buzz, nor this novel, Bubble, manage to reach the excitement that de la Motte achieved with Game, though this one at least manages to have a strong focus, even if that focus is generally split between the two main characters.  There is a lot of set-up to the final scene, and sometimes the action drags a bit, as though there wasn’t quite enough material to fill a third novel and it was padded just a bit.

Overall, not a bad read, but it still doesn’t reach the level of intrigue built in the Game.

Looking for a good book?  Bubble ends The Game trilogy and has a few surprises, but it doesn’t quite live up to the first book.