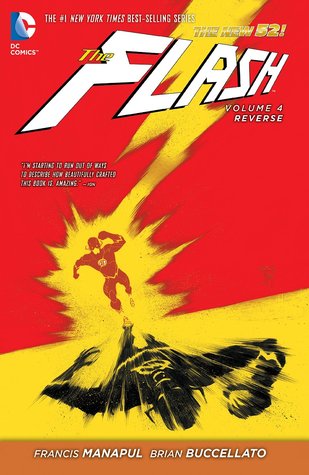 I am not a regular reader of any comic book or graphic novel title, though there was a time when I was.  I say this because maybe it’s important to know that I am not up to speed (pun intended) on the three previous volumes of the “New 52” Flash books.  And…that might be important.

Because I did not care for this at all.

First, I thought the art was dreadful.  It wasn’t stylized, it wasn’t realistic, it wasn’t … good.  And here I am talking specifically about the execution of the artwork itself.

But I also take issue with the layout of the art (and is that the artist or the author who decides the layout?).  If you’ve read many comics (or graphic novels), do you remember when you came across a two-page spread of art and it added to the ‘wow’ factor?  How the two-page spread helped that moment of incredible action as if everything that was happening couldn’t be contained in just one page?  Well, there are approximately 30 two-page spreads (not always one picture in two pages, but two pages designed in such a way that you must read all the way across the top of both pages as you work your way down) in this 176 page book.  That’s a lot.  It’s sort of the artistic equivalent of ‘crying wolf.’  After, oh, say, the fifth one you stop being impressed or awed by the forced energy and excitement that author Francis Manapul and artist Brian Buccellato are trying to create.

And on a technical level… I suspect that there are more than a few people, like me, who are reading their books digitally and these two page spreads actually slow down the action because we need to move the page back and forth in order to read the script sequentially.  (I know, it’s possible to have some readers open to double-page spreads, but then there’s issue with the size of the font….)

And so to the story…  Flash faces off against Reverse-Flash!  Chase! Battle!  Innocents will die unless Flash saves them!  Repeat!

What, exactly, is a ‘reverse’ Flash?  As “Reverse Flash” himself says…

“I’m not just some ‘backwards’ version of the Flash.  I can do MORE than just run fast.  I can turn back time. I can put everything in reverse.”

I’m not entirely sure how this is helpful.  Really.  And is Flash not fast enough to counter it?  Apparently not.

But then there’s something else going on called the “Speed Force” which is an energy form that Flash seems to tap in to in order to run fast.  It’s the same thing that Kid Flash and Reverse Flash also use and when one ‘taps’ into it, Reverse Flash can feel the use.  This reminds me a little of the Green Power that the Green Lantern Corps taps into, which is apparently finite.  Will Flash also find he can’t run fast once he and his speedy peers use up all the Speed Force?

This is where perhaps having read the other three volumes might have helped.  I would be hopeful that the story builds rather than constantly leaving some inexplicable happenings hanging out there for the new reader.  But in any case, I can’t recommend coming in to this book cold.

Looking for a good book?  The Flash, Vol. 4: Reverse doesn’t have much going for it.