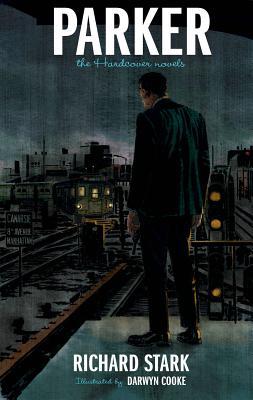 IDW Publishing, under the hand of artist Darwyn Cooke, has begun to adapt the “Parker” crime novels of Richard Stark, into graphic novels.  In conjunction with this, they are also releasing reissued, hardcover versions of the books, lavishly illustrated with Cooke’s cover paintings.  This is an all-around resounding success!

Parker: The Hunter is the first book in the re-issue series and it is a classic, gripping tale of macho men working in a dirty business with untrustworthy associates.  And Parker is the macho-ist of the men.  Betrayed by a colleague, and someone who works for a major crime syndicate, Parker is left for dead, shot by his own wife.  But tough men are hard to kill and after recovering, Parker storms New York and exacts his revenge on his wife, his partner, and the syndicate that employed the partner.

Stark’s writing is tight and direct and captures the gritty underbelly of the crime world.  It is violent and rough, yet Stark manages to not glorify the violence while giving us a main character that we can root for.  He does this by giving Parker motive, even if it’s the very basic desire for vengeance and revenge.  Stark also manages to sneak in just a little humanity to the powerful ‘machine’ of Parker by having him question, albeit briefly, his lack of remorse over the amount of killing he’s suddenly doing.

This is pulp crime fiction at its best and for those of us who are being introduced to Parker for the first time, we’re in for a treat.  And for those who remember the stories will enjoy the new editions with the great artwork by Darwyn Cooke.

Cooke’s paintings are perfect for the novels.  They capture the era and look as though they could have been painted in the early sixties.  From the tacky hotel wall-paper to the style of clothes, Cooke has clearly done his research for these paintings.  My only complaint…there aren’t enough of them!

This reissue has done exactly what the publisher would hope it do…it has captured my interest so that I want to read each successive reissue, and the art is so wonderful that I also want to make sure I read the graphic novels as well.

This is a resounding success.

Looking for a good book?  Good, old-fashioned crime/pulp fiction told by the master story-teller Donald E. Westlake, under his pseudonym Richard Stark, with beautiful paintings by Darwyn Cooke, can only mean that this is a book you won’t want to miss.