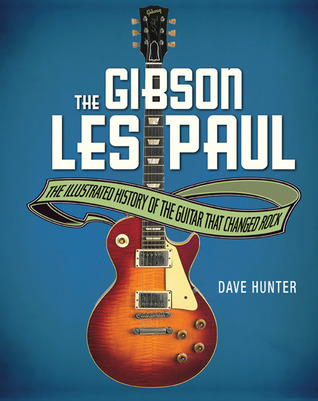 If you know anything at all about guitars, you know that Gibson Les Paul is one of the best, most popular guitars of the world.  Dave Hunter’s book, The Gibson Les Paul: The Illustrated History of the Guitar that Changed Rock is at once both a beautiful coffee-table style book, and a history book chronicling the origins and changes of one of the most famous guitars ever made.

Starting with a very brief history of the Gibson guitars and their quest for the ‘perfect’ electric guitar.  Hollow body guitars tended to produce too much feedback and so the move to the solid boy guitar was inevitable.  Enter Les Paul and a brief biography.  The fact that Les Paul was a musician is often forgotten (if ever known) by most people.  Paul’s notes and drawings are really a nice addition to this book.  The photo of Paul’s first attempt at an electric guitar is fascinating.  It’s got a sort of Frankenstein’s monster look to it as it’s made of pieces of other guitars.

There was some friction between Gibson and Paul, which is detailed here.  Author Hunter doesn’t pick sides, but lays out the facts as he can ascertain them.  Some of the friction can be traced to the changes in ownership as Gibson was purchased by different companies throughout its history and the Les Paul name was added to some guitars that Paul didn’t agree with.

All the history presented appears well researched and there is a real wealth of information.  Personally, I found this to be the real rewarding aspect of the book.

Many people will find the second portion of the book to be more to their taste…a photo montage of the various popular artists who use the Gibson Les Paul.  What is nicely done here is a very brief biography of the artist, the music they are best known for, a photo of the artist with a guitar, and a sampling of his/her record albums.  This is not a complete album list, but just a touch.  Something to whet the appetite.

The last section of the book, “Tone and Construction,” is the technical section.  Hunter tries to explain precisely what it is that makes the Les Paul stand out.  This is difficult to do as even Gibson has tried to recreate the technical magic of the classic Les Paul’s without getting it exactly right.  Whether it’s the weight or consistency of the wiring, or the thickness of the wire insulation, or the age of the wood, it is clear that the classic Les Paul guitars had the right blend of everything at the right time.  Detailed photographs and hand-written notes from the Les Paul archives really add a personal touch to the book.

I learned a lot about the creation and construction of one of the most famous guitars on the planet, but the book happens to look good, too!

I received this Digital Review Copy for free from edelweiss.com

Looking for a good book?  A photographic coffee-table book, a history book, a book on music entertainment… The Gibson Les Paul, by Dave Hunter, is a remarkably good book in all areas and will be much coveted by guitars lovers.

The Gibson Les Paul: The Illustrated Story of the Guitar That Changed Rock

One comment on “THE GIBSON LES PAUL – Dave Hunter”