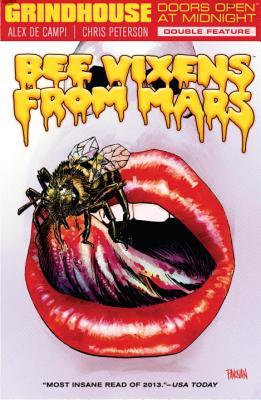 What did I get myself in to?!

Ever since I watched the 2007 film Grindhouse (a double feature with Robert Rodriguez directing Planet Terror, and Quentin Tarantino directing Death Proof) I’ve been slightly (let me emphasize slightly) fascinated with the grindhouse category of film (low-budget, hack-em, slash-em exploitation films).  I was curious to see how the category (truly a film category) might transfer to the comic book/graphic novel industry.  In my mind, it doesn’t.

What we have here are two horror stories, “Bee Vixens From Mars,” which has ample amounts of sex-tease and some pretty dreadful, horrific occurrences, and “Prison Ship Antares,” also with a fair amount of almost-nudity and plenty of violence.  Both stories do a good job capturing the feeling of the low-budget scripts of the grindhouse films — just the right amount of ‘story’ compared to action.

Where we don’t succeed well is in the art.  Grindhouse films tend to have a particular ‘look’ to them.  That look is nicely captured by the bonus art included here which is mock movie posters.  It also sports the film scratch look that is often part of a grindhouse film.  But the films tend to have dull, muted colors and lots of shadows (a result of the weaker lighting).  The art within the stories was bright and colorful and flat (lack of shading).  It never felt as though I were looking at a grindhouse film storyboard.

If you love the grindhouse film style and you like comic books, then you’ve been waiting a long time for this kind of graphic novel to come out.  But the stories aren’t particularly deep or memorable and the art is passable so it’s not something I’d recommend to the average graphic novel reader.

Looking for a good book?  Grindhouse: Doors Open at Midnight, Vol. 1 captures the essence of the grindhouse films, but ultimately the film medium doesn’t transfer well to the graphic novel format.