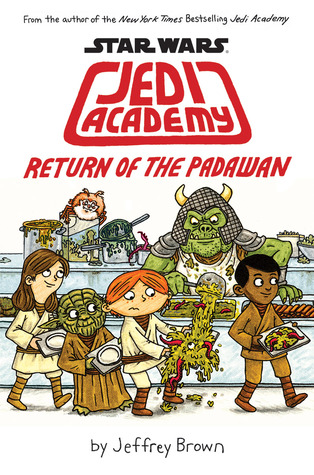 How do you hook early readers who are raised in a culture of social media and at-your-finger-tips-videos?  You hook them with books such as this, Jedi Academy: Return of the Padawan.

Roan is in his second year of Jedi training and young Roan deals with everything that the average middle schooler has to deal with … bullies, fickle friendships, teachers who seem to have it in for you, and cafeteria food!  It’s kind of the same plot as so many other pre-teen readers books, but of course with one major difference: Roan is hoping to become a Jedi Knight and there are a plethora of Star Wars references tossed in to the mix.

One interesting aspect of this book was that it didn’t always follow a straight narrative line.  The storyline was interrupted (or amended) by Roan’s journal entries, school newspaper pages, “Things Yoda Said This Week,” twitter-type discussion posts, etc.  It is all clearly designed to capture the feel of a modern student, and it does this quite well.

Although not specifically described as a graphic novel, that is precisely what this is.  The main story is done in comic book format with multiple panels per page, and even the additional pieces have the same style of drawing to them.  This is a graphic novel, and as such, the perfect vehicle for the target audience.

The art in this book is very much a comic book, or even a comic strip style, aimed at the elementary school readers.  Very cartoonish, meaning friendly and un-threatening and whimsical at all times.  It works very nicely.

What doesn’t work (for me), is the lettering.  Wow … who ever talks about ‘lettering’ in a graphic novel?  While I assume the decision to hand-letter, or hand-write, this book was done to keep the book feeling as though it were being written by a twelve-year-old, or to connect with the twelve-year-old reader, the book is actually difficult to read because of this.  I am making the assumption that this was done by hand rather than choosing a hand-writing font, as I can’t see consistency in the individual letters.  I read this book in electronic form, on a 10″ tablet screen, and reviewed it again on a large computer screen, both which are likely larger than the print format, and there were times I had difficulty making out the words.  Making something physically difficult to read is never a good obstacle.

The characters were fun and the cast of students each seemed just different enough to provide some variety, but over-all most elementary school readers will be able to identify with the trials and tribulations of school, and anyone who’s already taken the step to pick this up will love the Star Wars universe as presented here.

This is only year two and so clearly there is the opportunity for Roan and his friends to continue their education and for young readers to continue to have fun.

Looking for a good book?  Elementary school readers will love to be able to identify with their ‘peers’ in the Star Wars universe as they begin their Jedi Knight training in this graphic novel.