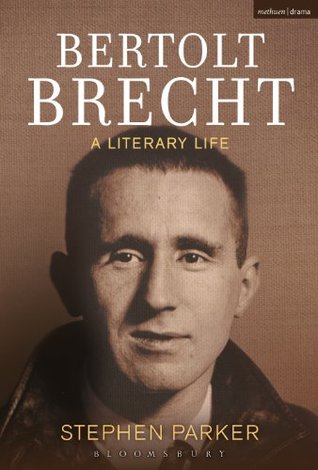 It was a little daunting, looking at a 700+ page book, a biography of a German playwright, but the research and presentation of Bertolt Brecht’s life is thorough and meticulous.

This isn’t your average, summer beach reading biography.  This is a comprehensive look at a political playwright of ‘epic theatre,’ and a Marxist.  One nice thing about a biography of a writer is that the writer often leaves a trail of thoughts, written and shared.  The work here is in gathering those thoughts by and about Bertolt Brecht.  The fact that Brecht was under surveillance by the FBI during his time in America in the late 1940’s gives us additional glimpses of his actions and friends.

While I commented on another biography recently that there was a lack of information about the subject, this particular volume goes a bit in the other direction.  There may actually be more here than I need to get a fairly comprehensive look at how this writer developed.  In particular, his early life gives me more detail than I felt necessary.  It is true, of course, that every moment in a person’s life builds upon the previous moment and develops who the person becomes, but we don’t necessarily need to relive every moment when looking back on someone’s life.

Because my familiarity with Brecht is through his works written for the stage, it wasn’t until we started to look at his theatrical involvements that I was truly drawn in.  This is certainly not a fault of author Stephen Parker, but rather what it was I wanted to know about the man.  To give us less would certainly feel incomplete if the information is at hand.

I learned a great deal about Brecht, and most definitely I will view his works in a new light, given what was presented here.  What did I learn?  …Where do I start?  I learned that “Improbable as it now sounds, Brecht’s rise to fame began as a patriotic war correspondent” according to Parker.  I learned that Brecht wrote a good deal of poetry — my favorite of those included in this book is “The Mask of Evil”:

On my wall hangs a Japanese carving
The mask of an evil demon, decorated with gold lacquer.
Sympathetically I observe
The swollen veins of the forehead, indicating
What a strain it is to be evil.

He also wrote nearly fifty film treatments while living in Hollywood; and considered himself to be an expert sexual operator (the latter a trait he may have picked up from his father).

I learned…well, let’s face it…I learned a great deal.  From his personal and professional partnerships, to his politics, to his theatrical works.  Parker is incredibly thorough here and I can’t imagine a year gone by in Brecht’s life that we don’t learn about what Brecht was doing or fearing or struggling against.  And of course it all comes to play in his writing — which is the whole point of reading a biography.

The book is a little dry at times.  I did struggle, especially early, to get through this, but ultimately, I’m very glad this information is available and that I read it.  I’m actually quite interested in seeing some of Brecht’s plays again, given my new knowledge, and while his works may not be produced a great deal in my area, I am also eager to re-read his plays.

Looking for a good book?  The biography, Bertolt Brecht:A Literary Life by Stephen Parker, may truly only appeal to dedicated theatre aficionados and hard-core biography readers, but the research is exhaustive and the presentation thorough.