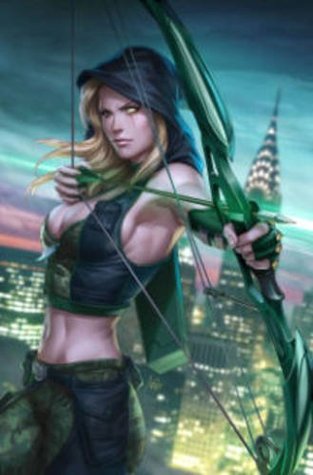 I feel like I’ve been beating up on a number of graphic novels lately, and I definitely had my concerns going in to this one (look at that cover illustration and tell me you don’t think it will have that objectifying women portrayal!).  But as I’d just finished Grimm Fairy Tales: Code Red, which I felt bordered on having a really strong story, and in which Robyn Hood makes a guest appearance, I decided to read through this volume, which has been sitting in my ARC queue for a little while now.

Robyn Locksley is street smart.  Out of necessity she steals medicine for her mother.  She fights every day … sometimes with an addict father, and sometimes with a rough group of high school peers.  It is from this fighting that she loses an eye.   And then Robyn is transported from her earthly life to medieval England, the city of Bree in the land of Myst.

Here, Robyn learns that she can fight back in ways that she couldn’t when she was in our own time… and she does fight back, killing without remorse, and perhaps enjoying this taste of bloodletting. In order to get back to her own time, Robyn must lead a revolt against King John.

This tactic of changing Robin Hood into the female Robyn works very well, and having her origins begin in our own time is also a nice twist to the legend/mythology.  What author Patrick Shand creates through the blending of the histories is a strong YA character who becomes quite adept at killing without remorse, which even she wonders at.  This is some nice story-telling.

As for the art… yes, we have the much-too-typical overly-busty female running around kicking butt.  Fortunately, the strength of the story surpasses the art’s intent to capture teen-boy attention.  Too often, in these sorts of graphic novels, the Barbie™-fied females are all that is drawing attention to the book.  Fortunately Shand has been working hard to create a strong story, which is part of a larger story arc, and more importantly, the interior art actually doesn’t typically over-emphasize Robyn’s figure.  She tends to be mostly dressed in jeans and a jacket.  It is the cover art that suggests something more.

I liked this book, and I liked the potential in the Red Hood book I reviewed the other day, and I think publisher Zenescope may actually be on to something.  Now…if the art could be drawn just a little more realistically, instead of preying on teen-age fantasies, we may have something worthwhile!

Looking for a good book?  The gender-bending twist in this Robin/Robyn Hood story works very well and sets up a stong character in a story that is worth reading.