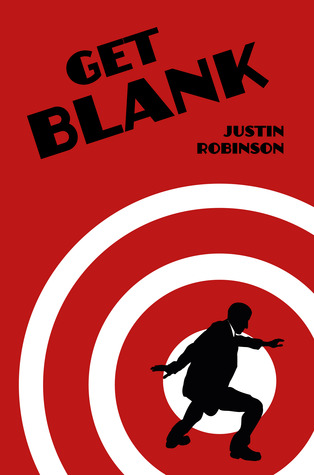 If you need a spy/detective, all you need is to get Blank.

Blank is a man of many names and even more talents, most of them useless, but some of them will come in to play.  He’s trying to retire from his active guess-who-I-am-today life, but the criminals around him have other plans.  Blank’s girlfriend Mina has been framed for murder.  A job so complete that Mina has no hope for bail and Blank is going to need to come out of retirement and pal up to some of the most detestable figures in the underworld.

Author Justin Robinson has a great concept and a great character here.  A spy/sleuth who is a blank slate and is named such as well.  He can become (and does) anyone, at any time, with full resources of the identities’ position at his disposal.  Unfortunately, most of his alter-egos (perhaps we should identify this as ‘alter-MEGA-egos’ as Blank is pretty full of himself) have been discovered at some point, so he can’t stay in any other identity too long.  Does that get confusing?  Yeah, a little bit, but that’s part of the fun.

The plot is ripe for an active spy thriller and Robinson mines the caricature character pool for all the most interesting types.  Although a spy/thriller novel, this is also, intentionally, a work of humor in the vein of Richard Hooker’s M*A*S*H series or writers like Chistopher Moore and John Kennedy Toole.    Robinson’s prose is nicely fitted for being Blank’s narrative voice.  I was hooked early on to his writing with the passage:

She was some kind of rockabilly goddess, with a halter top showing off an uneasy detente between cleavage and tattoos.  She smelled like cinnamon, and wanted me to be damn sure of that fact as she leaned to tickle my ears with her breath.

The problem I have found with humorous books of this nature is sustaining the level of comedy, and here I felt that the book didn’t quite live up to its potential.  A huge part of the comic aspect is Blank’s various personnas and the fact that he’s had so many of them.  But even as I read through this I thought to myself… “Is this man 120 years old?  How can he have developed and experienced so many professions and IDs and remember them all?”  It was fun and humorous at first, seeing him pull out an old police ID or some such, but after page 50 or so, it already started to get a little repetitive.  I wanted more story and less information on who he once was and all that the former name held for him.  (Though I have to admit that Robinson nicely caps it off when Blanks says…”It wasn’t the first time I’d impersonated a deity.”  Yeah, that’s funny.)

There’s a lot here that promises some really good spy/humor fiction and I’m looking to get ahold of the first book, and will be happy to read whatever is next in store for Blank.

Looking for a good book?  Get Blank is fun, funny spy fiction from Justin Robinson and just might be the right way to get a laugh while enjoying a little mystery/espionage.

series: Fill in the Blank #2