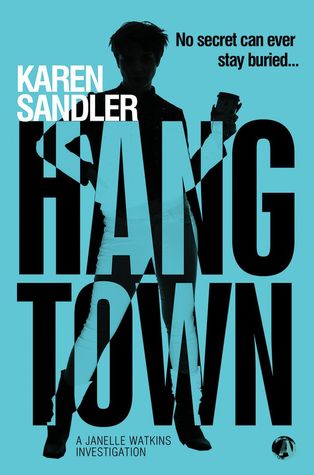 Janelle Watkins is a private investigator, damaged physically and emotionally, and currently living in her hometown, a small community of Greenville.  She used to be a detective in San Francisco but is currently not able to go back to that line of work, hence her PI work, living in a trailer home that was left to her by her abusive father.

Janelle discovers a teenage dead, hanging from a bridge near her home.  A number of clues lead her to suspect that it is not a suicide.  Janelle, and local Sheriff Ken Heinz, investigate the death and the disappearance of another person.  The death and disappearance would be enough for most mystery novels, but author Karen Sandler tosses in a few more complications…

Someone is sending texts to Janelle, digging up a much darker part of her past when she hooked up with men for one night stands; a form of self-abuse (not her only form of self-abuse, we discover, for this troubled woman).  The texts, although coming from a San Francisco area code, come from different, untraceable numbers.

Another complication for Janelle, is Sheriff Ken Heinz.  Janelle and Ken had been partners together as cops in the big city.  They’d had an affair and it destroyed Ken’s marriage.  Now back in the same small town, they partner again both in the investigation and in a physical relationship, though the personal aspect is a bit of a struggle.

The mystery in this book is fine, but what makes the novel interesting is the relationships and history of the people.  I was constantly more interested and fascinated by what I learned of Janelle’s past, or her relationship with Ken.  Having not read the first book in the Janelle Watkins Investigation series (yet) I knew nothing about the character and I was fascinated by the way the information unfolded before me.  Janelle’s dark past, and her attempts to make something of herself, despite what she’s clearly been through, is the real story here, slightly over-shadowed by the hanging.  And the fact that she hasn’t yet completely escaped the past that is haunting her, promises wonderful stories to come.

I’m not typically drawn to relationship stories, or at least not to romances, but when the book would leave focus on the relationship between Janelle and Ken to instead focus on the mystery, I was disappointed.  Janelle Watkins is a fascinating character and I’ll look forward to reading the first book in the series and I’ll definitely want to read whatever comes next.  A little stronger mystery for our protagonist to be involved in, and this would be a ‘must read’ book.

Looking for a good book?  Hangtown is a fair mystery that is recommended for anyone who enjoys getting caught up in the life of a flawed but fascinating female P.I. character.