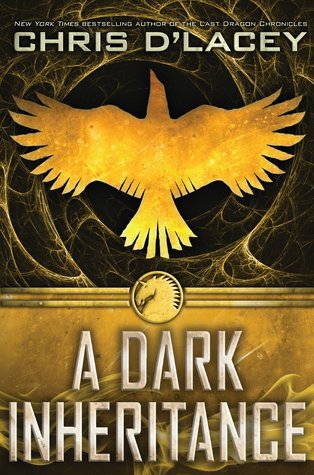 Science fiction, mystery, paranormal activity, alternate realities, action/adventure.  A Dark Inheritance by Chris d’Lacey has a little bit of everything!

Author d’Lacey drops the reader right in to the story without a lot of set-up, which I’ve always found to be a thrilling way to start a book.  We, the reader, get to learn and discover along with the characters.  So when teenager Michael is surprised by his own sudden appearance of a ‘power’ which manifests itself while Michael is clearly upset/nervous/anxious about an animal, we are also surprised and curious as to what has happened.

As the story develops, we learn that Michael has the ability to alter reality.  As his ability comes upon him, Michael is visited by representatives of an organization that uses the acronym UNICORNE.  The mystery surrounding UNICORNE is heightened when Michael learns that his father, who disappeared years ago, was an agent for UNICORNE.

The threads that tie together in the book are remarkable and this is not light reading, but the reader who likes to be challenged and think a little while reading will be rewarded.  I like being surprised when reading a book, and there was at least one aspect, involving two young women in the book, that I did not see coming (their connection to one another).

As much as I enjoyed the unravelling of the story and the intricate plotting, there were some aspects of the book that did not ring true to me.  Michael is assigned, for lack of a better term, a handler.  Someone to watch over him and hopefully guide him a little bit, once he joins UNICORNE.  This person, Chantelle, is rather a fun character, appearing in different roles throughout, but as his closest associate, and someone of authority in UNICORNE, she makes some un-wise choices that seemed to be so only for plot convenience.

There is also a sense that UNICORNE is not exactly what they are trying to convince Michael it is.  I don’t know if this is intentional and something will be revealed in later books in the series, or if I am reading too much in to it.  But in either case, it doesn’t work if I want to root for and support our protagonist and I don’t believe in the organization he’s joining — unless, of course, that’s exactly what d’Lacey wants, but then he’s spent too much time elsewhere for this to be the major plot-point.

I really was entranced and surprised and liked a great deal of the book.  I’m very easily intrigued enough to look forward to the next book in the series.

Looking for a good book?  You will have to pay attention to the story and try to keep up with all that’s happening, but this YA sci-fi adventure is a lot of fun and promises some excitement in future series installments.