LINDBERGH: THE TALE OF A FLYING MOUSE – Torben Kuhlmann 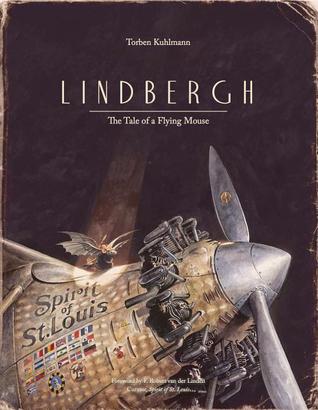 Lindbergh: The Tale of a Flying Mouse is a gorgeously illustrated picture book. The artwork is so beautiful that I found that I sometimes just get lost, staring at the pictures.

The story centers around a French mouse who one day discovered that he was all alone.  Al the other mice had abandoned him or had been exterminated.  The mouse wanted to live in the safety of others of its kind, so he planned to leave France, but getting away proved to be difficult.  Cats patrolled the docks and owls hunted from the skies.  Seeing a bat, the mouse decided that it, too, should be able to fly and goes about piecing together wings, then a motor, in order to be able to navigate to America.

It is a very cute story, and one sure to keep children listening (when they’re not looking at the beautiful pictures).

One thing that absolutely amazed me is the ability of author/artist Torben Kuhlmann to create a mouse that was engaged in human-like activities (scavenging and building an airplane) and yet constantly looking like an average, ordinary mouse.  Other than the actions taken, this mouse was not anthropomorphized or made like some sort of mouse/human hybrid. It was any cellar mouse that happened to have a sprocket or gear attached to its back, or happened to be wearing aviators goggles.  I know this will sound strange, but you must see it for yourself.  Just tremendous!

In addition to the art and simple, but engaging story, Kuhlmann manages to infuse a little history, hinting that Charles Lindbergh saw the tale of the flying mouse and it was that which prompted him to fly his Spirit of St. Louis.

The math and history almost work…. the book suggests that the mouse trap was a new invention.  A contraption that nearly wiped out the mouse population of France.  The book also suggests it gave a young Charles Lindbergh his idea to fly across the ocean.  The mouse trap was invented (patented, as pictured) in 1894.  Lindbergh flew across the ocean in 1927.  This would put Lindbergh in his late 30’s (if he was looking at a current poster about the mouse), which of course isn’t quite right.

It’s a quibble of a point, I know, but I also know that if I were reading this to my children, that’s the first question they would ask me, “Was the mouse trap really invented when Lindbergh was born?”

All in all, this is a really stunning book (I loved the page with the owls looking at the newspaper!).  It will be treasured by reader and listener alike.

Looking for a good book?  This is a fantastic picture book that will appeal to the adults who read it aloud, and the children who listen and look.  It is a must have!

Lindbergh: The Tale of a Flying Mouse

One comment on “LINDBERGH: THE TALE OF A FLYING MOUSE – Torben Kuhlmann”