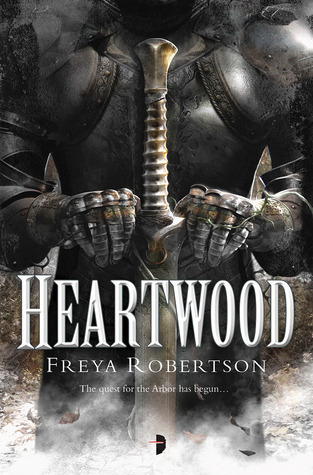 Heartwood, by Freya Robertson, is the first book in the ‘Elemental Wars’ series.  The series promises to be epic in scope, judging by this first book.

The story, briefly (if that’s possible): The Tree of Life, known as the Arbor, in Heartwood is dying.  Its heart has been ripped out and broken in to a number of pieces, with each piece hidden in one of the different regions.  If the tree isn’t restored to health, sickness and misery and death will continue to spread across the land.  A group of would-be heroes have gathered for a conference/peace treaty and send their best and bravest out to find the pieces of the Arbor’s heart.  Getting in their way are warriors and water-based creatures that don’t necessarily want the land to be saved.

The novel is ambitious, well-crafted, intricately plotted, but otherwise a bit dull.

Books that are ‘epic’ in scope tend to have a lot of characters.  This is certainly no different.  But the down-side to this is that all the characters seem to need, or demand, immediate introduction at the beginning.  This takes time, and because no one is actually doing much at the start, it’s hard to identify the different characters by their manners/habits/characteristics.

And because we are in a unique, very interesting world, there is a fair amount of ‘world-building’ that has gone on and we, the reader, need to know about this new world (the world, or at least parts of it, is very much a character in this book).

All of this is to say that the book, very early, is bogged down with information, information, information.  It isn’t until almost half-way through this 500+ page book before interest in what is happening starts to build and we get pulled in by action.  And sadly, it is the action that pulls us in.  Because of the sheer volume of characters, it is nearly impossible to identify or bond with any of them.  The most humanizing moments are some of the most dreary: the separation and death of the twins; the seduction of a female warrior; the disappearance into the water elements of one of the major characters (and why, you may ask, is a seduction ‘dreary’?  Because it is akin to rape).

One would hope that, with seven different quests occurring at one time, we’d be more than excited to get to each group to find out what trials and tribulations they are encountering.  Sadly, that is not necessarily the case.  For me, there was still some confusion as to who was who, which led to more confusion as to who was in each group.  (And I’m still not buying the flimsy excuse to split up the twins when at least one of them clearly had a bond that required he be with his brother.)  Until the action picks up (ie: attacks and battles), there’s very little to keep us interested.  What I didn’t feel in these various quests, was a sense of urgency.  They talked about it, but it never felt ‘do or die.’

This is a book one in a series, and it feels like it.  It feels as though the sole purpose here was to make introductions, establish the danger and the parameters in which everyone must work.  And within this context, it is successful.  We meet a lot of people, we know what the danger is, and the magic of the world is becoming understood.  But 500+ pages for all that, was a long, mostly dull read.

Book two is out, and there’s enough here that got interesting in the end that I am curious and interested enough to read the next book, but I’ll do it sooner rather than later so that I don’t forget the players.

Looking for a good book?  Heartwood is the beginning of an epic fantasy that gets bogged down in introductions (the characters and the world which they inhabit) and only just starts to find its groove as we near the end.