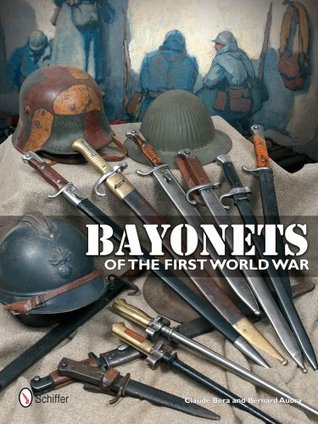 This is a high-quality coffee-table book for history and military enthusiasts, originally written in French, this was translated by the publisher (Schiffer).

Authors Claude Bera and Bernard Aubry have clearly done great research for this book and have included quality, in-depth technical listings of a wide variety of bayonets.  The photos are pristine and very, very impressive.  Even reading a digital advance reader’s copy, I couldn’t help but be impressed with the very high-caliber of the photography.  Occasionally there were also extreme close-up photos of the engraving marks (stamps of the makers) which are a true benefit to anyone trying to identify a blade.

But what about these bayonets?  Why are there so many different models?  What were the different blades used for?  Where they all for standard combat?  Why the different lengths?  Why the curved pommels?  Could any bayonet be attached to any rifle?  Or where bayonets specific to a rifle?  I really wanted to know more about the uses of the bayonets, and not just the technical details.

Occasionally we get some additional details.  For instance: Knife-Bayonet Model 1884-98 a/A 1st Type “was made about 1908-09 for the Kar 98 AZ which equipped cyclists, signals personnel and aerial training personnel.”  Why?  Why was this particular bayonet given to these specific classification of people?  This additional detail is not included.

While I don’t want to review what the book isn’t, I do think it was a missed opportunity.

The book goes through the war, year by year, and looks at the bayonets from each country.  It is amazing the variety of looks and styles there were to the bayonets.

Accompanying the photos of the bayonets are photos of military personnel from the various countries, and each chapter includes a full-page photo of a typical uniform, including hat and/or helmet, rifle, and various styles of bayonets.  On page 63 is a photo of a German uniform, complete with metal chest plate.  I admit that I’m not the most knowledgeable person on military history, and it stunned me for a moment to see a ‘modern’ military uniform include metal armor.  I can’t ever remember seeing a war photo of soldiers in armor like this, but it makes perfect sense that if combat included close, personal combat with bayonets, that soldiers might wear protection from such attacks.  Of course todays soldiers also wear protective armor, in the form of flak jackets, but this metal plate looks positively medieval.  It’s a wonderful reminder that this war, taking place in the very early 20th century, was a cross-over from 19th century style combat to a much more modern warfare.

Looking for a good book?  This is a stunning book for anyone interested in history, military history, or photography.

Bayonets of the First World War