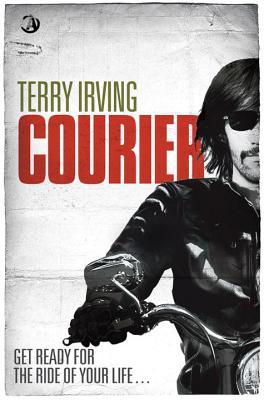 I had some high hopes, going in to this book.  1970’s. Washington/Watergate scandal.  Vietnam. Couriers.  I’ve lived through it all (even having been a courier) and I wanted to see a tight mystery/thriller wrapped up in this setting.  Sadly, that’s not quite what happened.

While it starts off on a pretty fast note, the action slow way down, and it’s more than two-thirds of the way in before it picks up again.  In that time, we mostly read a lot of motorcycles and dropping/popping clutches and what it feels like to ride a BMW bike very fast.  Our protagonist is Rick Putnam, a Vietnam vet and a courier for a news company.  Rick suffers from post-traumatic stress, mostly at night, when he can’t sleep for more than three hours.  During the day he’s a pretty relaxed guy who finds solace in riding his bike.  Our plot is that he has picked up a canister of film that potentially has some very damning evidence on it that could rock the political world and send the President of the United States into a downward spiral.  Some group will stop at nothing to destroy that canister of film and anyone who’s had any connection to it.  Rick is next on their list.

There is such great opportunity here for a solid, nail-biting thriller, but it never surfaces.  The bad guys are at first incredibly stupid … twice they take a captive and send Rick to get the canister in question, allowing him to make some other rescue plan, and at other times, they are all too easily dispatched by either a quick maneuver on the bike, or by a karate-chop.  And while there seems to be a new danger around every corner, and some of the corners come as a surprise, the plot is so straight-forward that we know where it’s headed.  The action never builds.  Instead, it’s like Rick’s BMW bike … it just races through everything.

There seemed to be enough serious set-up and information about the woman Eve and the Native American battle with Washington, that I was waiting for some connection which never appeared.  A missed opportunity, in my mind.

The characters in the book are generally pretty flat.  We get to know Rick fairly well, and the woman Eve, as just mentioned, has the potential to bring a great deal of excitement and thrills to the book, but doesn’t.  She does become Rick’s love interest, which was not unexpected, and works just fine.  Everyone else is just a name — a placeholder for some necessary action.  Even Gordito, who plays a pivotal role and is the only character in the book that has a connection to Rick’s past as well as present, is cardboard.  This, even though Gordito is part of the only sub-plot in the book, which is developed very late and ends very quickly.

Historically speaking, this is a great setting for a thriller.  And while I don’t begrudge anyone taking some liberties with timing and locations, when the choice is made to set a story in a very specific time frame, it is distracting to bring in to play something that doesn’t fit.  Rick’s roommate’s mention playing Dungeons and Dragons, and it actually comes in to play in a rather important way.  Did I mention that this book takes place in 1972?  Dungeons and Dragons was published in 1974 (that wasn’t hard to Google).  And even we presume that Rick’s friends were beta testers for the game, it would have been VERY unlikely that they would have been role-playing the game, and certainly even more unlikely that someone in Madison (sic) had gotten lost in steam tunnels while role-playing the game (the kid was from Michigan State and it was 1979 — which is not to say it couldn’t have happened to someone in Madison, of course).  Sorry…this is just too obvious an error and doesn’t fit well with the rest of the historical background of the book.

Looking for a good book?  This book reads easily and quickly, but moves by so fast that you don’t get to know the people or get a chance to experience any thrills.