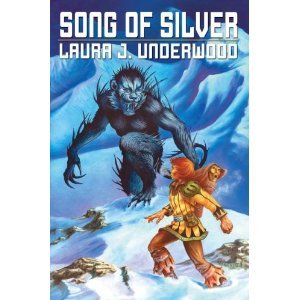 Most of the fantasy that I’ve read lately would likely be classified as ‘urban fantasy,’ but Song of Silver, a collection of shorts stories by Laura J. Underwood, harkens back to the days of Fritz Lieber and classic Dungeons and Dragons gaming.

Considered a “Harper Mage,” Anwyn Baldomyre wanders the contryside (Lamboria) with his magic harp, Glynnanis.  On the surface of things, it seems that Anwyn gets them in to trouble, and Glynnanis gets them out.  But their relationship seems quite symbiotic and it seems that Anwyn’s being a mage causes much of the trouble for the pair.

The stories included here are:

In reviewing the list of stories, I was going to say that “Shadow Wraith” was the strongest of the collection, with a much more focussed task/obstacle for Anwyn, and a very challenging course of action for the pair (Anwyn and Glynnanis).  But then I realize that I greatly enjoyed “The Well of Toberclough” and “The Auld Wife’s Lift” as well. In fact, all the stories are quite well written, and Anwyn’s world is well conceived.

But most of the stories lack ‘bite.’  I think that “Shadow Wraith” has stuck with me the most is because it is the story in which the harper mage seemed to have the most to lose.  In the other stories, while death may have been the threat, it never felt as though it were a true possibility.  Only in “Shadow Wraith” was I brought in deeply enough that I thought that there was true danger at hand.

I enjoyed the characters and the world and I’d be highly interested in reading a novel-length adventure of this classic-stle fantasy.

Looking for a good book?  This collection of fantasy stories featuring a musical mage is well done and is reminiscent of the style of classic 1970’s fantasy.