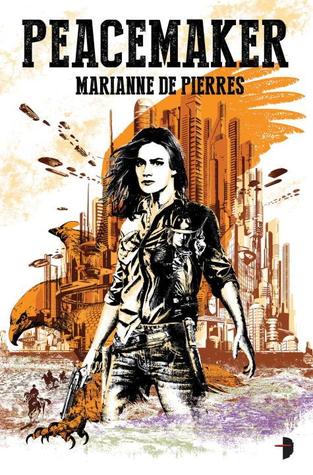 If you’re a sci-fi/fantasy enthusiast, how often have you read a book and, whether or not you liked the story-telling, felt like it was really nothing but a rehash of an already over-used scenario?  Move over stale f/sf themes; enter: Peacemaker, a wholly original and thrilling fantasy adventure.

Set in the future, when urban sprawl has decimated much of the earth, Australia’s Birrimun Park, an ecological haven in the middle of a coastal megalopolis, the story focuses on Virgin Jackson, the park’s ranger.  Virgin is asked to look after visiting US Marshall, Nate Sixkiller.  Virgin, who can be a bit strong-willed and bullish, takes her job very seriously.  She loves the park, as did her father (who died under suspicious circumstances).  There’s a police officer determined to pin a murder wrap on Virgin, and her on-again-off-again boyfriend stripper boyfriend seems a bit jealous of Marshall Sixkiller.  To add to Virgin’s troubles, she’s having visions of an ‘imaginary’ eagle, a sort of familiar or totem, which she has seen since she was a child.  No one else has ever seen her eagle … until Nate Sixkiller!

This book is a fascinating blend of western, fantasy, mystery, thriller. I was exciting by the western-ness of the story, while understanding the fantasy aspect at the same time.  It’s a blending of genres that typically haven’t worked well together (with the possible exception of Joss Whedon’s Firefly television series).  Then, just a little bit in to the book, I was excited by what I felt was a strong Native American sensibility.  It was more than just Nate Sixkiller’s background and name… it was a conveyance of tone and theme such as one might find in N. Scott Momaday or Leslie Marmon Silko.  It was beautiful.

On top of the Native American and American Western genres comes the mystery.  Or rather … mysteries.  Who killed the man Virgin found in the park?  Who attacked Virgin in her home, and why?  Who killed Virgin’s father, and is there a connection?  Who is Nate Sixkiller?  Who is Virgin’s boyfriend, Heart Williams?  Who is…who is…who is… and why, why, why?  You can practically see the rings around Virgin’s head as she tries to piece together all the different variables in her life, but just as she seems to be about to get a handle on one, she is thrown a curve.

The mega-city is filled with lawless and organized gangs, and Virgin works every angle she can, drawing some of the criminal element in to her circle in order to protect the park.

Author Marianne de Pierres has done a remarkable job creating a world that is at once totally recognizable and believable.  She has also given us a large variety of characters who are unique from one another and also totally believable in their environment.  And she’s given us a story with non-stop action and plenty of mystery.

But I think what impresses me the most is the incredible blending of genres.  Listed as science fiction/fantasy in the publisher’s catalog, this is just as easily a mystery with fantasy elements, or a thriller, or… I haven’t been this excited about a book that engages me on so many different levels, in a long time.

With all my praise and hype, there are two down-sides to the book.  The first being my usual issue with ‘serial’ books in that there are too many questions left unanswered.  Clearly an attempt to get us excited for the next book in the series, this has the effect of not being a complete book, to me.  Nate Sixkiller can’t tell Virgin what division of the U.S. Marshall’s he belongs to without our wanting to know more.  Virgin’s offer at the end of the book, and Nate’s declaration are clear plot points for an over-arching storyline, but leave this particular book with an unsatisfying ending.  As a book-buyer, I may have to start doing with books, what I did with comics years ago…stop buying the individual issues/books and wait for the compilation graphic novel/book set.  This move, which I suspect is more publisher oriented than writer oriented, is certainly not regarded in high favor.  Plenty of successful authors have written books in a series with a recurring character and each book is a complete story.  I could list them, but any reader older than thirteen could also list them.

The second point that was less than remarkable was Virgin’s super-heroic ability to take punishment and keep on going.  The attack on Virgin and Nate near the end of the book was over-done and their survival seemed super-human.  Interestingly, I’ve recently read Neil Gaiman’s Ocean at the End of the Lane with a similar styled attack.

I will look forward to the next book in this incredibly original adventure, and I hope I see more of the same cross-blending of genres.  It works very well.

Looking for a good book? This action-packed, genre-blending sci-fi/fantasy/mystery/western will have you turning pages quickly as you get sucked in to the story.