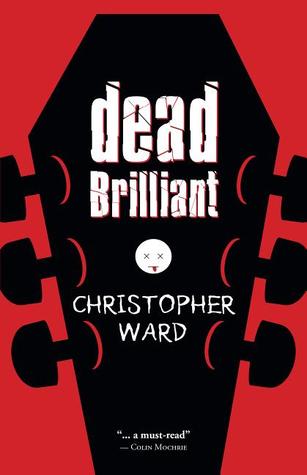 I knew nothing about this book, or the author, going in to it.  Perhaps it’s a sign of the sort of books that I’ve been reading lately, but I suspected (feared?) that this was going to be another vampire story … a vampire musician.  But, dear blog readers, it’s NOT!  This is a novel of music, talent, greed, obsession, and the Hollywood music industry.  It’s a beautiful book.

Our hero is one Roc Molotov, a musician and lead singer and founder of the band, The Cocktails (yes, Molotov and the Cocktails — that’s a sign of the humor that will be found throughout the book).  Roc quits the band to focus on his own music, but in the fleeting business that is the pop music industry, Roc will quickly become forgotten.  Roc’s long-time friend and manager, Uncle Strange, hatches a plan to have Molotov disappear and be presumed dead, on live television (MTV, back when they used to be focussed on music) and Uncle Strange could release new Molotov songs as if they were unfinished works found in his archive.

The plot is certainly not new.  You only need to look back at the whole idea of The Beatles’ “Paul is Dead” to see a classic example of this marketing ploy (though the Beatles likely didn’t need to do this).  But whereas the plot isn’t new, the character’s in Hollywood’s music industry are often not particularly new or creative either.  And Uncle Strange comes across as the classic, stereotyped example of a producer always looking out for his own interests over those of his client.  And yet…it works.

This works because it preys on our own stereotyped impressions of the music industry and Hollywood.  We buy into the idea of Roc faking his death because we have every expectation that this is the sort of thing a musician would do.  And that Uncle Strange is perfectly devised as a slimy, lecherous, greedy manager helps us get there.

What also works, though, is that Roc breaks our impressions, our stereotypes, by being a humble, honest, decent guy who really likes to write music and does it well.  he breaks out of the mold and we can only like him more for it.

Other characters are equally stereotyped along the way, adding to the humor and panache of the book.  It serves no purpose that a southern rube becomes an overnight sensation, other than it gives us a laugh and allows us to shake our collective heads at the absurdity of the business.

Looking for a good book?  Dead Brilliant doesn’t take itself too seriously, but offers us a few laughs as it pokes fun at the music industry, and allows touching human nature to win out in the end.