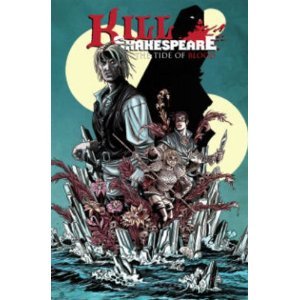 Yesterday I finished a mystery novel using Shakespeare as the hero detective.  Today, Shakespeare continues to serve as a literary character in a slightly different way.

I will admit that I hadn’t been much of a comic book reader of late (until I started reading more graphic novels for this review blog), but one of the very few titles that I did read was the Kill Shakespeare series.  This particular book picks up well after I stopped reading the individual comics (I stopped after one year).

Here, Shakespeare serves not only the creator of some of the world’s most well-known fictional characters, but appears as a character himself, as a bit of a deity — he is, after all, a creator.    The book centers around Prospero, on his island, as he schemes to bring Shakespeare to him in order to steal Shakespeare’s powers.  Hamlet, Romeo, Juliet, and Othello try to fight Prospero off by taking the fight to the island.

Certainly it’s difficult to write new stories with characters who are so well known and studied.  Do they behave the way they ‘should’?  But examining these characters in this way is pointless.  The worlds in which the characters existed for Shakespeare himself is completely different than the world that authors Connor McCreery and Anthony Del Col have created for this book.  Simply having Hamlet and Romeo and Othello standing side by side has already let the reader know we are in a different reality.  But I do wonder why we see these more famous of characters.  The Shakespeare canon is full of interesting characters.  Instead of a simpering Romeo, where’s Orlando?  Need a villainous character?  Why stick with the obvious?  Where’s Jachimo?

All this is to say that we don’t need only the ‘name’ or obvious characters to make it Shakespeare-related.

So to the story: This is a volume three, and clearly much has been missed.  If the reader is not already familiar with what is going on, s/he will be left behind.  Even knowing the earliest part of the story, I still felt lost and out of the loop.  I very ,much like the over-all arc of the story, and dwelling here on Prospero’s island, complete with all its magic, was nice, but felt drawn out.  We spend so much time going back and forth on the Hamlet/Juliet/Romeo triangle sub-plot and never getting to the bigger story, that there were times I just didn’t want to read any more.  Lady Macbeth’s portions of the story were much more interesting and kept my attention much better.

The artwork by Andy Belanger was decent.  It’s not as strong as other graphic novels I’ve look at recently, but better than others.  There were times I wasn’t sure who was speaking, based simply on the artwork, but it captures the mood of Prospero’s island quite well.

The concept is strong, and when the writing moves the plot forward, it’s captivating, but when it dwells on a sub-plot is drags along.

Looking for a good book?  Playing with Shakespeare and his characters is fun and this series has some intriguing moments.