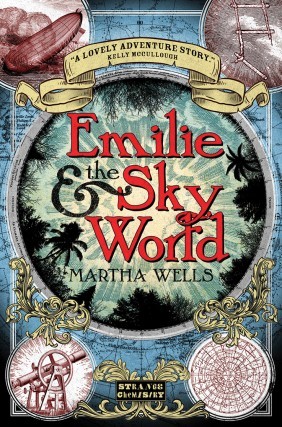 I’ve been feeling very good about the books I get from Strange Chemistry and Angry Robot, so I was really looking forward to this.

Emilie is a typical teen protagonist: adventurous, inquisitive, strong-willed, inexperienced.  Author Martha Wells does a very nice job of understanding Emilie and getting the reader to relate to the young girl.  It is easy to imagine the YA reader who would be most drawn to Emilie — I picture those youngsters who, if they had been born in the 1960’s or 1970’s, would have been big Nancy Drew fans.  Emilie has that same sense of curiousity and ‘can-do’ attitude.

Apparently, having finished a previous adventure (this is a book ‘2’), Emilie is looking to some down time.  However, after seeing a new space vortex, referred to “aether,” which appears to open to a new or parallel world, Emilie’s interest is piqued.  The problem is — the first few who have ventured into the aether have not returned.

In a ship that seems to be a form of space-voyaging dirigible, Emilie joins a crew of scientist explorers.  The aether has currents and they struggle with the current until they see another ship, which appears to have been abandoned, except for some unusual looking plants.

The plants turn out to be another intelligent life form.  Emily and Hyacinth (the name Emily gives to the plant) communicate with gestures until Hyacinth provides a translating device.  The plant forms are also trapped in this unusual world.  The aether path to (and presumably from) the world is going to close and Emily, Hyacinth, and their fellow travelers are anxious to get on their ships to return home.  Complicating matters, another creature seems to have taken control of the physical bodies of other travelers known to Emilie, but of course only Emilie and Hyacinth seem to understand this.

It is nice that author Wells doesn’t waste time with superfluous descriptions.  Often a reader will travel to a new world and get detailed scientific descriptions of the flora, fauna, atmosphere, etc.  This is an area where Wells gives us the descriptions that seem most appropriate for the teen character to give us.

But at the same time, the lack of descriptions often left me more confused than anything else.  I’m not really sure what the aether ships look like or how they travel.  I have no idea what the basic landscape on the strange planet is like, which is important only because Emilie finds a way to hide in it.

And where there is a lack of description to give the reader a visual to imagine, there is also a lack of energy and tension.  One would think that visiting a new world, having a deadline to get away, and alien body-snatchers, would make for a tight, tense book.  But that’s not the case.  We move from one incident to the next, and from one character to another, with the same pacing.  Because of this, the tension fails to build, and by the half-way point we aren’t eager for the next chapter because we know it will feel exactly like the one before.  We continue reading for the information and story, but the energy is gone.

There’s enough here that I am interested in going back to read the first ‘Emilie’ book, and I would likely pick up the next book (providing there is one) were i to see it in a store, but it’s not a book that I would recommend with great excitement.

Looking for a good book?  This book should appeal to a small sub-set of YA readers who can truly identify with the main protagonist.

Emilie and the Sky World