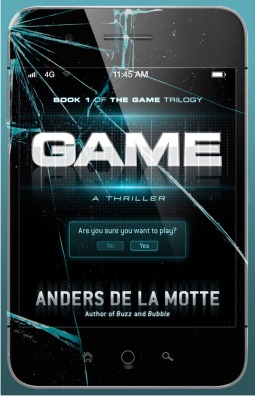 The Scandinavians seem to have a lock on the mystery/thriller genre, and Game by Anders de la Motte will only add to that reputation.

In Game, Henrik Petterson (HP) finds an unusual cell phone on a commuter train.  He picks it up and begins to get text messages, targeted specifically for him.  The texts invite him to join the game, which means doing tasks dictated by the Game Master, which range from pranks to criminal actions.  Everything is video taped, both by the game-player, and others in the area.  Video is posted on a secure server and rated by participants.  The players receive points, and money, for their progress.  As the game gets more intense, HP has to make some important decisions.  Complicating HP’s involvement in the game is that his sister, Rebecca Normén, works for the Security Police.

The action moves along swiftly enough and author De le Motte does a great job of making the reader feel completely paranoid the thicker we move in to the workings of the game.

The challenge that De la Motte makes for himself is creating a character that we can feel drawn to, or at least understand or sympathize with, and yet is someone who would not only be sucked in to the game, but be willing to perform illegal actions to stay invovled.  This sometimes works, and sometimes doesn’t.

What works is the sense of addicition HP has to the game.  He seems motivated to play and continue playing because of the lust he has to do one better; to move up a level; to achieve a sense of growth (ie: power).  This is a great definition of an addiction!  As a player of a world-wide game myself (geocaching — not at all like the game in this book), I totally understand this desire.

What also works is the familial bond.  His sense of duty and devotion to his sister rings true.

What doesn’t work: the depravity of the character himself.  His lack of any moral responsibility (except toward his sister) is an inhibitor toward liking him.  I think that the addiction could be enough for us to accept his willingness to play, even when things get ‘dicey.’  It does seem, as the book goes along, that HP’s moral compass changes a bit, but it could be too late for many readers, who’ve already given up on the man.

Some of the best characters in the book belong to those who remain unseen.  The mystery about them keeps us constantly wanting to know more.

The character of Rebecca Normén feels intregal to the story, and yet her obvious ties are a bit unsatisfying.  I truly hope that there are better connections in the rest of the trilogy.

As to the plotting and set-up — this is near brilliance.  De la Motte wastes no time setting up the Game and the action builds incrementally and well.  The plot changes direction, keeping the reader on the proverbial toes, which makes the book totally enticing.

While the book almost stands alone as a book, there is a clear, obvious lead in to the next book in the trilogy.  I am typically not in favor of this kind of literary game.  I accept it as relatively commonplace these days, and at least the book is clearly marked and advertised as “Book 1 in the Game Trilogy.”  Still…I yearn for the days in which authors write, and publishers publish, a book.  If the book is successful, the author can write a follow-up.  But to plan a series ahead of time just seems like a publisher’s greed.

Looking for a good book?  This book one in a thrilling trilogy will keep you on the edge of your seat and guessing (probably wrong) along the way.