ME AND MURDER, SHE WROTE – Peter S. Fischer 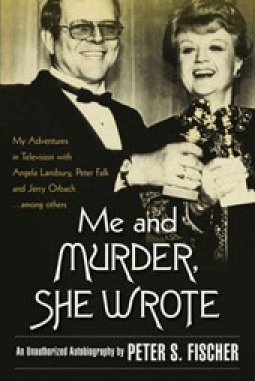 I enjoy reading ‘behind-the-scenes’ books from the entertainment world.  I suspect this comes from my own professional work backstage.

This particular book caught my eye because 1) Murder, She Wrote was one of my wife’s favorite television shows (along with Columbo), and 2) I lived and worked in LA at the same as most of this book takes place, and much of the industry was familiar to me then.

Fischer’s writing is quite readable (no surprise, since he wrote popular mystery/drama for millions of people) and the book flows very easily.  I did find it, shall we say, ‘interesting’ that he often chose the incorrect pronoun when writing me/I (“…both he and Angie wish Bob and I good luck.”) .

His flowery prose often made me chuckle (“Her eyelashes were long enough to erase a blackboard”), especially at times when I thought I was expected to be familiar with something (“We all know the cliché.  If we allow the camel to get his nose under the flap of the tent, pretty soon the rest of the camel is in your lap, taking up most of the space.”  — Really?  That’s a cliché we all know?).  And occasionally I’d stop and have to think about a misplaced modifier or odd simile (“…sipping inedible coffee…”).  But for whatever reason, it actually all made me like the guy a little bit more.  Made him seem down to earth.  That’s not to say a little tougher editing might have been helpful!

But that doesn’t change the fact that Peter S. Fischer was (is) a talented writer and creator.  And what most likely helped him tremendously (as he also points out on many occasions) was his ability to work fast.  His ability to understand the medium, be creative, and write quickly most likely is what made his career the success that it was.

One thing that surprised me was Fischer’s willingness to be blunt and name names and lay blames.  If he didn’t like someone or didn’t think their work was quality, or if an actor was responsible for the failings of a show…he didn’t mince words.  Never did his observations seem vindictive or angry … simply his outlook on the issue.  Clearly this is someone who has retired from the industry and not looking to go back (Hollywood may be impatient, but it has a long memory).

Although I may disagree with his take on himself (being an outsider), I enjoyed his look at the Hollywood industry — a perpective that we rarely get to see (we saw a similar perspective in When Variety Was King last year).

It is interesting to note that while this is labeled an autobiography (humorously modified as “unauthorized”), it really deals almost exclusively with his work in Hollywood.  Fischer writes often of his wife, but the rest of the family is nearly non-existent until we learn that a son has helped set up a publishing company.  read what you want in to this, since Mr. Fischer doesn’t have much to say on family life.  His life and focus is on writing and producing during those years (according to the book).

Since his retirement from Hollywood, Fischer, who feels the need to always be writing, has been working on novels.  The last portion of the book talks a little more about them, along with information on where to find them (like his time in Hollywood, he decides to do novels his way instead of the mainstream publishers’ way).  I’m intrigued enough that I will check out one or two of these mysteries!

Looking for a good book?  This is a very readable, fun look at Hollywood and the creating of a long-running, hit television series.

Me and Murder, She Wrote: An Unauthorized Autobiography