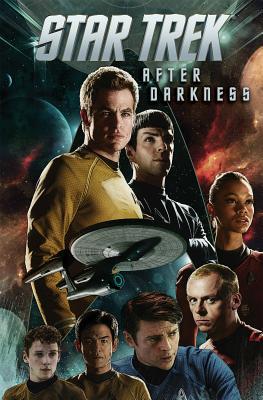 I have to admit that I’m a Star Trek nerd from waaaay back, and I actually liked those old Gold Key Star Trek comics.  Not for the art (which perhaps goes without saying), but because it was a way for me to continue to get my Star Trek fix.

I was only peripherally aware that there was a new Star Trek comic based on the reboot movies, so this review copy came as a nice surprise.  This graphic novel picks up shortly after the movie (Into Darkness).  However, having seen the movie is not a prerequisite to reading this book.  Unfortunately, having read some of the previous issues of the comic series might be.  There are a number of references to previous issues — characters met, situations endured.  Not being a regular reader, I can’t exactly refer back to an old issue or even fondly recall the moment.

What works nicely is the sense of the characters.  Although based only off of two new movies (and almost five decades of television history), I can hear the current actors’ voices in these roles, here in the novel.  This is not as easy a job as one might think.  I’ve read a fair number of Trek novels and too often I don’t hear the right character voices.

What also works, is the artwork.  Historically, I’ve felt that comics based on live-action actors, whether television or film, have suffered from art in which the reader can only occasionally recognize the drawn characters.  This is not the case here.  While still ‘comic book art,’ it looks good, and consistent, throughout.

Something that movie producer J.J. Abrams has clearly been doing in his reboot, is taking pre-existing stories from the Star Trek history, and re-introducing them, with a twist, for his new crew.  This IDW graphic novel picks up on this idea and runs with it.  ‘Runs,’ perhaps, a little clumsily.

I liked the storyline with the Gorn.  For those not Trek-savvy, the Gorn is/was a race of giant reptiles in the first season of Star Trek, that Captain Kirk had to fight, mano-a-gato to save his ship.  I very much liked the re-envisioned look of the Gorn.  They were so much more threatening than the rubber suit with glitter-ping-pong-ball eyes that we saw back in 1967.  However, the story seemed to end much too easily.  There seemed to be no true conflict, and what little there was was easily overcome with a little talking (if only it truly were that easy).

But as much as the Gorn story worked, the pon farr story did not.  One of the most popular original Trek episodes could easily be “Amok Time,” in which Spock undergoes mental and physical anguish because it is his mating time (once every seven years).  Like the Gorn storyline, this, too, was easily overcome.  The moment pops up and then it seems easily dismissed.  I’m still wondering why it was even included.  It seemed to not be a complete story in and of itself, and it added nothing to the Gorn storyline.  It read, to me, as if the writers and editors were shouting, “Look how clever we are!  Look how we can combine two old stories into one!”

I do enjoy finding new stories for my familiar friends (and what Trek fan doesn’t consider these characters their friends?), and maybe I even secretly enjoy the nod back to the original series with new twists on old tales, but above it all, I like good story-telling.  Whether new story line or old, familiar characters or newly introduced figures, there needs to be a story.  A plot.  Obstacles to overcome, challenges faced and conquered…that’s what makes Trek work, and that’s not quite established here.

Looking for a good book? A true Star Trek fan will enjoy seeing their friends in action, but there’s not enough story to capture anyone’s interest.