RED HOOD AND THE OUTLAWS, VOL. 3: DEATH OF THE FAMILY 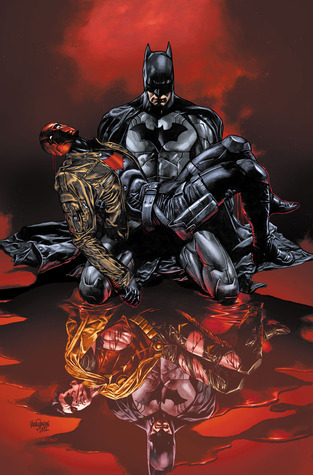 Here we are with still another “Death of the Family” book in the DC comics “New 52” comic book/graphic novel series.

If you are a little bit confused just as to who the Red Hood is, feel free to raise your hand, alongside mine.  If you are pretty clear as to who this is, you must read a lot of comic books!  I’ve gone back and done a little research and learned that Red Hood is Jason Todd, who was the second ‘Robin’ to Batman.  Jason Todd/Robin was killed by the Joker (who, incidentally, was the original Red Hood back in 1951 [are you with me, still?]).  Jason Todd/Robin was resurrected (it’s comic books … they do that) and becomae the Red Hood — an anti-hero with an attitude.  Have I lost anyone yet?

In this book, Jason tells what a rough life he had, how he met the Batman, how he became Robin with an edge, how he was killed, and sort of (not really) how he was ressurected.  That’s the first seventeen pages. We deal a little bit with the outlaws (Roy [‘Arsenal’] and Kori [‘Starfire’]) after that, and Red Hood gets trapped by the Joker (who, sadly, isn’t quite as fearsome in this book as he has been in other titles).  The outlaws meet up with the Teen Titans — both realizing that they are missing a partner “Red Robin” and “Red Hood.”

This is a little complicated and the story branches out a lot, but it’s still a manageable read.  But then we get two pages of ‘Arsenal’ flashback, that probably isn’t at all necessary, spend 11 pages fighting alongside the Teen Titans, and then we have one page teasing us with a new storyline, feturing a Dr. Hugo Strange, then back to the Teen Titans, and then we meet up with a completely new villian, Death Stroke, with another one page teaser of a story.  Eight pages of Joker story, which seems like it would be nice, but it’s coming from Nightwing’s point of view… we’ve already read that in the Nightwing book.  Then it’s time for that obligatory 33 pages of story that is found in each of the “Death of the Family” books.  It almost fits well here.  But it is followed up some ‘outlaw’ story that doesn’t feel like it ties in well (but it does manage to include young Damian, the newest Robin.  ANd then it’s back to more Joker story and one of the most ill-fitting nightmare sequences I’ve ever read in a comic book.

This book has it all, and unfortunately, that’s too much.  This could have, should have, narrowed its focus and told the story … not all the stories.

Perhaps, if you’re a serious comics fan you understand all these people and relationships, but to the outsider, it failed to tell a cohesive story.  What worked well, were the parts that were told elsewhere.

This had the potential to be a strong book, but tried to do too much.

Looking for a good book?  This almost works, but less would have been more.

Red Hood and the Outlaws, Volume 3: Death of the Family