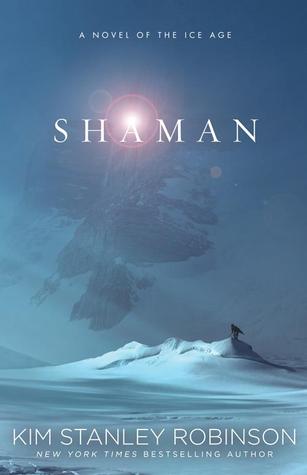 Opening a new Kim Stanley Robinson book, whether physical or electronic, is to know that, as a reader, you are about to go on a journey that will long be worth remembering.

Shaman feels like a departure for Robinson.  Typically his books have a cast of characters so long and complex that the readers needs a score sheet  to keep track of their movements.  And each set of characters has their own plot line, often disecting, sometimes running parallel to the books’ central theme.  Shaman deviates from this norm.  The entire book seems to focus on one Paleolithic man, “Loon.”  Loon is surrounded by others, but only three characters, “Heather,” “Thorn,” and “Elga” figure prominently in the novel.

What is not unusual in this Kim Stanley Robinson book is Robinson’s understanding of, love for, and writing about, nature and environment.  I see this in all his novels, and it is one of the things I like most about his work.  Imagine Aldo Leopold or Sigurd F. Olson writing science fiction/fantasy, and we come close to the genius of Robinson.  (Have I made it clear yet that I’m a fan of his work?)

Shaman starts with Loon setting off on his “wander” — that time when a boy becomes a man and must prove himself capable of surviving a  month on his own.  Here, though, he is also proving himself as a future shaman … the care-taker of a a small band, or village, of people.  He is apprenticed to Thorn, a cranky but loveable figure who has much to teach.  It drives Thorn crazy when Loon intentionally wants to change lines in a recited poem to make it his own, or so that it relates more to his own understanding.

Loon, we learn, was orphaned and taken in by Thorn and Heather, the wise, almost-witch-like, herb woman who seems to have more power in the community than anyone else.  Thorn will doubt his ability to become shaman as he wasn’t born to the role, but forced to it by adoption.

Loon will meet his future mate, Elga, at a once-a-year gathering of clans.  She, like Loon, comes to her role through an adoption of sorts … adopted first in to the clan through which Loon meets her, and then in to Loon’s clan.  It will be through Elga that Loon takes a life-changing journey … a continuation of his wander.

Author Robinson creates truly wonderful people.  Each with a unique identity and so very appropriate to the time frame.  What we see as we read this, is that human-kind hasn’t changed so very much over the course of tens of thousands of years.  If anything, we’ve become less adept at being able to survive the wilderness; less capable of reducing waste in what we use; less thankful for what we are provided.  But we do see that what hasn’t changed is the human passion for love; the human need for companionship; the homan desire to improve on what s/he already has.  Here we see Loon making small, but we have every confidence that it will be lasting, improvements in conceptual thinking (art), and logic thinking as he improves upon existing snowshoes.

Everything I’ve ever read of Kim Stanley Robinson’s has been inspiring, and Shaman is no exception.  Although relatively simple in story and plot, it is remarkably bold and comprehensive in scope.  It feels as though nothing less than the future of mankind is on the line — we either grow and survive, or we remain stagnant and the future is bleak, and Loon is the hinge-pin.

One of the more fascinating aspects of Loon’s training is his learning to paint.  How to mix the colors, how to apply it to the cave walls, how to show movement and action.  Robinson writes about art, as an artist.  He understands it deeply and fully and conveys all the feelings and emotions of an artist.  We understand Loon’s work because of what it means to him.  It’s an amazing ability to write about art in such away that we understand or feel that art.

I hadn’t made the connection until late in the book, but I had recently watched a documentary on the cave of Chauvet Pont d’Arc, and was completely engrossed in the cave paintings and animal bones found in this cave.  When Loon first entered the cave to paint, I immediately thought of Chauvet Pont-d’Arc, because it was what I could relate to.  But as the story developed, and particulalry through some actions of Loon’s near the end, I became more and more convinced that it was this cave that inspired Robinson to write this story. (You can see some of it here at their website.)

One extremely interesting aspect of this book… while the narrative of this book is third person, mostly focused on Loon, but occassionally on Thorn, there were two moments (and only two that I noted) when there was a brief first person narrative, by a person not identified.  I have my suspicions as to what’s happening at those times, and I look forward to re-reading the book and better inspecting these moments.  Robinson, being the the writer that he is, you know it’s not an accident, but because it’s so spare, it feels like a mistake.  I read the first, first person section three times, trying to understand what I had come up against.

Still, this is one of the most remarkable and memorable books I’ve read in a very long time.  This should be on every reader’s list.

Looking for a good book?  This is it.