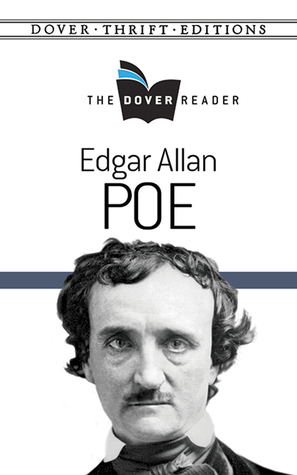 I last remember reading Edgar Allan Poe’s fiction back in middle school, and his poetry when I was in college so I thought it was well past time to dig into some of his work again. And what a treat to do so!

Publisher Dover, who repeatedly does a very good job publishing no-frills ‘thrift’ editions of classic works, has done a fine job here, giving us a lot of Poe. And let’s be honest here, a little Poe goes a long way, so a lot of Poe needs to be read over lengthy periods of time.
What I found is that Poe’s short stories still show why he’s a master story-teller and why students still read his works in school. There’s a lot of power and suspense in his short works. Stories like “The Fall of the House of Usher” and “The Tell-Tale Heart” and “The Pit and the Pendulum” (the first story I ever remember reading by Poe) still hold up well against modern fiction, though some of the formality of the language does seem archaic at times.
I’m not a person inclined to read poetry much but one of my favorite poems has been Poe’s The Raven. Once again, I was reminded why I like this so much as I read through it.  Poe combines the power of the rhythm with an almost supernatural, dark story and it really sucks you in.  I also enjoyed “The Bells” – a poem I’d not known about.  Poe definitely caught the sense of ringing bells in this work. The rest of the poetry for me was, “eh.”
The one longer work included here was The Narrative of Arthur Gordon Pym (sometimes referred to as The Narrative of Arthur Gordon Pym of Nantucket).  I think this was my first encounter with the book and I was not impressed.  It felt unnecessarily drawn out and I was interminably bored through 90% of the book.
But the gem here for me was some of Poe’s non-fiction.
“Maelzel’s Chess Player” is an article Poe wrote, exposing the fraud behind an automaton chess player known as ‘The Turk’ which was touring Europe and America in the mid-1820’s. It’s a really interesting read and you don’t have to know ‘The Turk’ as Poe’s article describes it quite thoroughly.
And finally we get The Philosophy of Composition” in which Poe writes about how good writers write when they write well. (Thanks, Wikipedia.) Examining his own work, Poe chooses his poem “The Raven” – which I’ve already mentioned as one of my favorite poems. Getting insight on how he wrote this iconic work is quite interesting.  I’m a little disappointed that my college professor who introduced me to the poem didn’t share this article as well (we didn’t have the internet when I was a college student, friends).

I had now gone so far as the conception of a Raven—the bird of ill omen—monotonously repeating the one word, “Nevermore,” at the conclusion of each stanza, in a poem of melancholy tone, and in length about one hundred lines. Now, never losing sight of the object supremeness, or perfection, at all points, I asked myself—“Of all melancholy topics, what, according to the universal understanding of mankind, is the most melancholy?” Death—was the obvious reply. “And when,” I said, “is this most melancholy of topics most poetical?” From what I have already explained at some length, the answer, here also, is obvious—“When it most closely allies itself to Beauty: the death, then, of a beautiful woman is, unquestionably, the most poetical topic in the world—and equally is it beyond doubt that the lips best suited for such topic are those of a bereaved lover.”
I had now to combine the two ideas, of a lover lamenting his deceased mistress and a Raven continuously repeating the word “Nevermore.”—I had to combine these, bearing in mind my design of varying, at every turn, the application of the word repeated; but the only intelligible mode of such combination is that of imagining the Raven employing the word in answer to the queries of the lover.

Fascinating.
This book contains the following:
FICTION
MS. Found in a Bottle
King Pest
Ligeia
The Fall of the House of Usher
The Murders in the Rue Morgue
The Masque of the Red Death
The Mystery of Marie Rogêt
The Pit and the Pendulum
The Black Cat
The Gold-Bug
The Tell-Tale Heart
The Oblong Box
The Purloined Letter
The Imp of the Perverse
Some Words with a Mummy
The Cask of Amontillado
The Narrative of Arthur Gordon Pym
POETRY
A Dream
Dreams
A Dream within a Dream
Evening Star
“The Happiest Day, the Happiest Hour”
The Lake: To ____
Spirits of the Dead
Stanzas
To ____ (“I saw thee on thy bridal day—”)
Fairy-Land
Romance
Sonnet—To Science
To ____ (“The bowers whereat, in dreams, I see”)
To ____ (“I heed not that my earthly lot”)
To the River ____
To Helen
The City in the Sea
Israfel
Lenore
The Sleeper
The Valley of Unrest
The Coliseum
To One in Paradise
To F ____
Sonnet—To Zante
The Haunted Palace
Sonnet—Silence
The Conqueror Worm
Dream-Land
Eulalie—A Song
The Raven
To M. L. S. ____
Ulalume
To ____ (“Not long ago, the writer of these lines”)
To Helen
Annabel Lee
The Bells
Eldorado
For Annie
To My Mother
Alone
Alphabetical List of Titles
Alphabetical List of First Lines
NONFICTION
Maelzel’s Chess-Player
A Few Words on Secret Writing
The Philosophy of Composition
Looking for a good book? If you haven’t read Edgar Allan Poe in a long time (or not at all), then you really should pick up The Dover Reader: Edgar Allan Poe. There is a reason his works are still published – they are good.