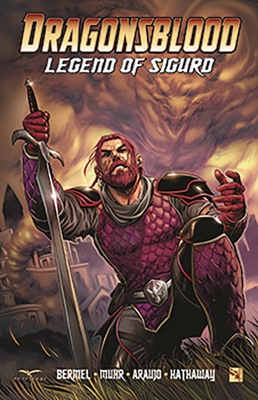 The Volsung clan have been charged with slaying the dragon Fafnir.  No small charge for any family.  Now Sigurd is the last of his clan and it’s up to him to do what no one else in the clan ever has. The battle is fierce, but Sigurd manages to slay Fafnir thereby breaking a long familial curse.  But not long after, Sigurd begins to experience dragon-like powers, which attracts the attention of gods such as Freya who want to enlist Sigurd’s help in battle.

The Norse mythology connection definitely appealed to me when I saw this but I really was a bit disappointed because really the Norse connection to this is tiny.  I have no problem with creating a new legend or adding to an existing myth – the ancient myths are full of inspiration for plenty of modern tales – but I do have a bit of a problem if it doesn’t understand the legend it is retelling,

This is a four-part story (four comic book issues put into one graphic novel) and only the first part is attached to the “Lgend of Sigurd” with his fighting the dragon.  The other three parts are Sigurd trying to figure out what to do now that he’s completed his life’s goal and so he becomes a mercenary. It’s not much of a story.

The artwork is fair.  I’m not generally a fan of computer-generated artwork (and because so much of it is done this way, it explains why I don’t read a lot of graphic novels any more) – it’s glossy and there’s typically more variety in the coloring/shading but it also tends to look flat to me. The art here isn’t bad, but I wouldn’t buy this just for the art.

I’d also like to note that the book contains multiple two-page spreads with dialog.  My digital reader doesn’t allow for reader two pages at a time on the screen, so this made it tremendously difficult to navigate during these moments.  I don’t know if this is something that only happens to the review copies, or if there is an entirely different manner of e-reader meant for graphic novels.

Looking for a good book? Dragonsblood is a graphic novel that is, overall, a bit of a disappointment. I suspect buyers may pick this up based on the connection to Norse mythology, but most will be sad to discover that it’s really just another hack-and-slash adventure comic using a familiar Norse name.

Dragonsblood: The Legend of Sigurd