AN EYE FOR AN EYE – Caroline Fardig 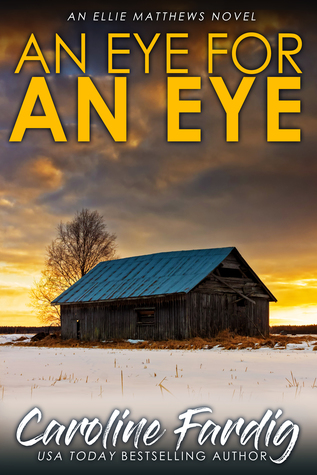 Ellie Matthews is a criminologist now working as a professor at a local college. She recently assisted on a high-profile murder case, garnering some unwanted attention and now he’s happy to just get back to teaching. Despite her desire to hide in obscurity she agrees to an interview with a charming young student who says he wants to make an impression on the school newspaper editor by landing the one interview that no one else can get.

Not long afterward, a family friend is found dead, murdered, in the bushes on campus and Ellie’s younger sister, Rachel, is missing. The only clue is a cryptic note that references an older criminal case – a case that has been closed due to a conviction.

Despite her close connection to victims of the crimes, Ellie is the bast at what she does and she is brought in to help solve the case.  Time is of the essence when the kidnapper gives Ellie and the police a deadline before he does to Rachel what he did to the family friend.

Under a great deal of pressure, Ellie falls into alcohol bottles and pushes away Detective Nick Baxter who is looking out for her as well as trying to solve the case.

I’m familiar with Caroline Fardig’s writing only from the more lighthearted Java Jive mysteries (which I’ve greatly enjoyed) and the darker nature of this book took me a little bit bu surprise. But a good surprise.

Fardig is a solid, quality writer and this dark thriller is nicely plotted. Ellie works swiftly, uncovering clues from the past with relative ease. She does occasionally make some assumptions (that prove correct) in order to keep the story moving along, but this is mostly forgivable.

There are a couple of moments when the suggestion of romance is brought forth, in particular, when Ellie takes note of a strong, handsome man, but of course she dismisses it because she’s busy trying to find her sister. Just the idea of her noticing it strikes me as a little bit off, but I recognize that this likely speaks to her larger reading audience.

Every once in awhile, when reading a book, a line or phrase really strikes me. In this case it was the simple phrase “…while knowing my only sister is waiting for us…”. I’m not sure why the adjective ‘only’ is used here.  If Ellie had more than one sister, would that have lessened the severity of the need to rescue her?

This is the second book in the Ellie Matthews series, but I never felt as though I missing something important to understand what was happening.  Anything that was needed to know from the previous book appeared to be

Overall this was a solid, quick, thriller read.  It ends a bit abruptly, but the journey is engrossing.

Looking for a good book? An Eye for an Eye by Caroline Fardig is the second book in the Ellie Matthews thriller series. It is a dark, tense thriller with just enough touch of gentleness, that this should appeal to many mystery/thriller readers.

An Eye for an Eye