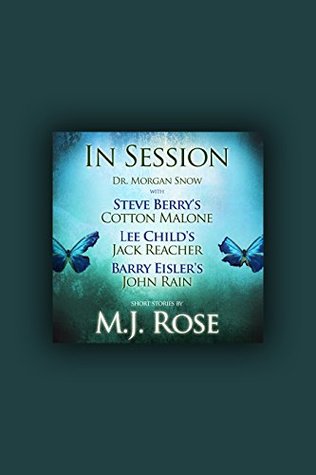 I’m a virgin to all four characters here: Dr. Morgan Snow, Cotton Malone, Jack Reacher, and John Rain.  But the premise intrigued me and the length was just right to make some introductions.

Dr. Morgan Snow is a sex therapist.  Not surprisingly, the people she comes in contact with on a daily basis have some interesting stories to tell.  The sort of stories one would ONLY tell a sex therapist.  In In Session, we get three stories in which Snow interacts with Cotton Malone (a character created by Steve Berry), Jack Reacher (Lee Child’s creation), and John Rain (the product of Barry Eisler).  Each story is quite different and I presume in line with how the ‘other’ character (Malone, Reacher, Rain) would ordinarily react (although they are written by M.J. Rose).

In her afterward, Rose explains how the concept came about and what sort of input was provided by the other writers.

I was most fascinated by Dr. Snow and I look forward to reading some of Rose’s other works with this character. But I can’t say that any of the characters DIDN’T interest me.  Each held some fascination, but each was so different that it’s really hard to compare.

The Cotton Malone story (“Extenuating Circumstance”) was probably the most interesting to me.  It was quite clever and it was this story that also made me want to read more about Snow as well.

The story featuring John Rain (“Decisions, Decisions”) was the most active, but it also touched on an aspect of sexuality that we don’t often see in fiction – the sexual gratification from something other than sex.  I wouldn’t mind seeing this story fleshed out (pun intended) a little more, or at least another encounter with these two characters, although even with my limited knowledge of Snow, it didn’t feel right that she approached Rain the way that she did.

The story with Snow and Jack Reacher (“Knowing You’re Alive”)  was the most tender of the works despite the atrocity that brought the story together. This one was mostly a tease for me and made me want to read more just to get to know the characters in more depth.

This is an unusual work – three characters from three different authors interacting with a character by another author – but it works, in part because it’s short and direct, rather than trying to introduce the readership to each character.  The proceeds from this short collection go to wishyouwellfoundation.org.

It is well worth the price and you should get this.

Looking for a good book? The brief collection, In Session, by M. J. Rose is a delightful combining of Rose’s Dr. Morgan Snow character with three other notable literary characters and is worth reading.