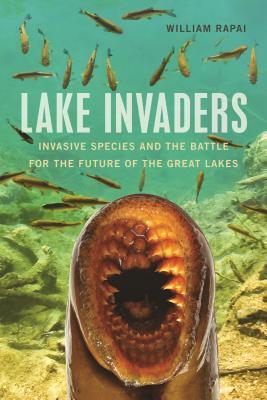 I consider myself to be someone concerned with environmental issues but let’s face it … how many of us (others concerned with environmental issues) spend much time thinking about or actively working to combat invasive aquatic species?  It’s a lot more fun thinking about saving the eagles or the wolves or some cute owls, but we need to be more aware of, and more concerned for, our lakes.  Particularly our Great Lakes.

Author William Rapai takes up the mantle and very eloquently lays out our current invasive species’ in the Great Lakes, how they came to be in our lakes, what effect they are having (how they are forcing out some of the native species), and what measures are being taken to combat the invaders.

At times the writing got a little more technical than I am prepared to follow.  Not being a scientist, just an average concerned citizen, I’m less concerned with the science involved and more concerned with what we – the average person – can do about it.  I recognize Sea Grant, which Rapai mentions, as I have a relative who worked for the organization many years ago.

Rapai does a nice job of also making the point that our government oversight hasn’t been able to keep stride in combat efforts.  Whether through budget cuts, or denial that there’s a problem, the government agencies tasked with protecting our water haven’t been able keep pace.

if the relationships between states, the provinces, and the federal governments are complicated and complex, add on regulation from the International Maritime Organization and international treaties, and brains begin to explode.

He points out that as bad as the United States’ efforts are, Canada is probably even worse.  (“Until 2015, Canada was fighting invasive species with a patchwork of twenty provincial and federal laws…”)

It isn’t all bleak, but “there is more work to be done, and there’s a role for individual citizens of the Great Lakes region.”

This book should scare you, but it likely won’t reach enough of the people who need to read it.

Looking for a good book?  Lake Invaders by William Rapai is a thorough, sometimes very technical, exploration of the invasive species that inhabit our Great Lakes.

Lake Invaders: Invasive Species and the Battle for the Future of the Great Lakes