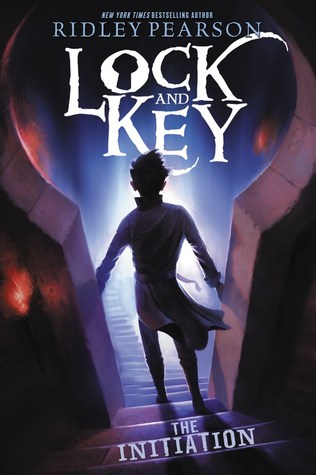 Ridley Pearson, the popular author of the Peter Pan story Peter and the Starcatchers, reboots the Sherlock Holmes series with Lock and Key: The Initiation.

James Moriarty (and his sister Moria) is sent to the boarding school Baskerville Academy.  He doesn’t want to go, but his father strongly reminds him that attendance at Baskerville is a family tradition that goes way back.  Before leaving, however, the father gives Moria some information that he will may be leaving town but he will find a way to check in with her on a semi-regular basis.

At Baskerville, James is tasked with finding a missing heirloom … a Bible.    There are plenty of clues and a massive sense of secrecy surrounding the Bible.  James’ smart-ass roommate, a kid named Sherlock Holmes, gets involved.

The story is very interesting, though those of us who are already familiar with Holmes may wonder why the series needs a re-boot.  A teenage Sherlock Holmes and James Moriarty, in the present day, often just led to confusion for me and I have to confess that I never quite got comfortable with it.  The teenagers aspect was fine … it was the present-day setting that kept throwing me off.

The story is active and interesting, and following the Moriarty’s is a nice twist.  Sherlock (nicknamed “Lock”) comes off as a bit of a jerk and e probably like James more than young Master Holmes.  I suspect that this is Pearson’s intention.

But probably the most interesting aspect of this book is that it is from Moria’s point of view.  Well … sort of.  Here’s where the book gets a little tricky and confounding…

Some of the book is in first person, through Moria’s eyes.  Chapter 1 starts: “Terrified for my life, I ran from my brother. I was faster.”  In Chapter 2 we have sentences such as: “James and I had come to know each and every sound like the face of a friend.”  There are plenty of chapters that read this way; in first person.  But then you get into chapters like Chapter 7 in which James is in a one-on-one conference with the school’s headmaster and the chapter is told from a third-person narrative.

It goes back and forth like this throughout the book without any hints or clues as to why. (I should note that my copy is an ARC and most of the chapters were still “Chapter Title TK (to come)” and perhaps there would be some sense of perspective from these when they are in place.

Unfortunately, this changing perspective meant I had trouble understanding whose story this was.  It starts out being Moria’s story.  But then it quickly becomes her brother’s story.  But when Sherlock gets involved, how can we NOT think it’s his story, especially when he takes over investigating?  But then it returns to Moria and then finally back to James, and then Sherlock again.  Confused?  Yeah, easy to do.

The writing itself is smooth and the characters are interesting.  It’s certainly fun to see these people as teens.  But the book lacks a clear focus.  Perhaps that will come with the sequels … oh yes, there WILL be follow-ups.

Looking for a good book?  Ridley Pearson’s reboot of the Sherlock Holmes story, Lock and Key: The Initiation is easy and exciting to read, but lacks focus.

The Initiation (Lock and Key)