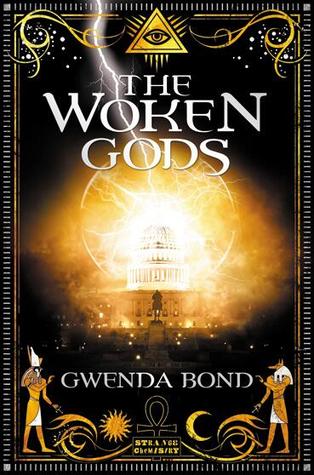 The bandwagon is moving on.

Gwenda Bond’s The Woken Gods is a YA novel that fits right into the ‘this is what everyone’s reading’ category.  Ancient gods rising/waking and causing havoc and just might bring about the end of everything.  This could be the description of an eighth of all the YA books that have come in the last three years – or since Rick Riordan’s Percy Jackson first made a big splash.

Kyra Locke is a seventeen-year-old student in Washington, DC who encounters two trickster gods on her way home from school one day.  One god gives her a warning and the other threatens her.  Kyra gets away from the trickster gods with the help of some other youth who are members of a secret organization called Society of the Sun.  The Society members were looking for Kyra because they need her help in locating her father who disappeared with a dangerous Egyptian artifact.  The hunt leads Kyra into some dangerous territory, with terrifying ancient gods and secret society members coming out of the woodwork to challenge her.

I happen to like mythology and am really glad to have a renewed interest in it because of a few popular books, and I actually think the market can easily sustain a few more, even if they are a bit derivative.  But the bar is set pretty high and all new ‘ancient-god-based’ YA fiction really needs a unique hook to hold on to the reader.

This book doesn’t have it.

Where to start… Let’s start by saying, this book was about as dry and dull as it could be.  Now let’s move on to world-building…

This is supposed to be the United States a short few years after the gods have woken.  It was a terrible thing and lots of death and destruction followed their rising.  Except we get no sense of it.  We are told about this, but the world doesn’t feel different.  We are only told it is different.  World-building?  No.

How about the characters?  Kyra as a protagonist is dreadful.  She is mostly unremarkable except when she can suddenly do or know something without any effort or previous experience or knowledge of the subject.  She takes things pretty much in stride, which means obstacles aren’t a big deal.  Kyra is in love with Oz…the young super genius in charge of the secret society.  I’m not sure how he got to where he was, and I’m doubly unsure what Kyra saw in him.  He lacked personality (even on paper) and I never cared if the two ever saw each other again or not.  Kyra did have determination, but I never felt that she deserved to succeed.

Plot? Things were a little too smooth and the people a little too gullible, allowing for successful actions which should have been challenging.

I wanted to see another successful YA book with ancient gods telling a ripping good yarn, but this one just doesn’t work.  It’s almost as though Ms. Bond was trying to do too much and include all the best parts of a lot of different books, but in doing so, she really couldn’t create any one thing that worked effectively.

Looking for a good book?  If you want some ancient gods or mythology infused with your modern-day YA, you might want to look somewhere other than in Gwenda Bond’s The Woken Gods.