THE BEST TV SHOWS THAT NEVER WERE – Lee Goldberg 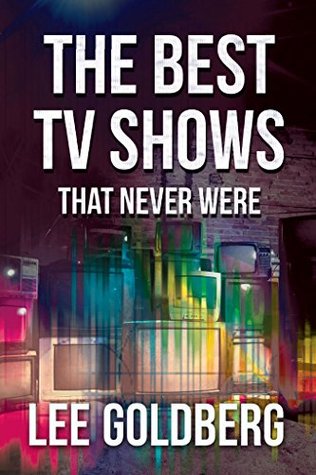 In television lingo, a ‘pilot’ is a one-time television episode that is made to show television executives what a show might look like (apparently because these executives have no imagination from simply reading a script).  Every year, there are MANY television pilots made by a variety of networks and studios, all trying to create the next ‘hit’ television series.  And every year, most of those pilots are shown to some executives and then sent to a shelf never to be seen again.  In this book, Lee Goldberg shares with the reader a number of pilots that were never sold to become series’.

I’ve written before on how I really like television reference books and this is a great addition to my bookshelf of television-related books.  The difference here is that usually my tv-related tomes are something I refer to while watching a show or movie.  Because this is a book about shows that were never aired, I’m not likely to use this as a reference.  I did, however, really enjoy reading through this, getting a sense of the sorts of shows that were popular (or trying to be popular) in these previous decades.

There are some very nice little gems in this book.  One of my favorites is a show called The Bakery, made in 1990.  “An exceptionally well-made, innovative twist on the conventional cop show, developed for CBS for the 1989–90 season. Each episode of the proposed series would frequently time-shift between decades while following a core group of police officers through the 1960s, the 1990s, and the early part of the twenty-first century. ”  Author Goldberg doesn’t hold back on his own thoughts and writes that “CBS should have made room” on their schedule for this.

In addition to reading about these shows, it’s also fun to look at some of the actors who were making pilots.  I don’t think I was aware that Harrison Ford had a small role in a pilot (“The Possessed” in 1977), but it doesn’t surprise me how many pilots William Shatner made.

The only disappointment here is that while this book is published in 2015 (reissued, I believe), it doesn’t have much in the way of updated, modern pilots.  I’m not sure the purpose of reissuing a book like this but not updating the information.  This still only covers the years 1955-1990.  I would imagine that trying to uncover information on television pilots in the age of 100+ television channels quite a challenge.

All in all, this is a great book for anyone who enjoys television-related history or just enjoy random trivia.

Looking for a good book?  Lee Goldberg’s The Best TV Shows That Were Never Made is a great book for anyone interested in television.

The Best TV Shows That Never Were