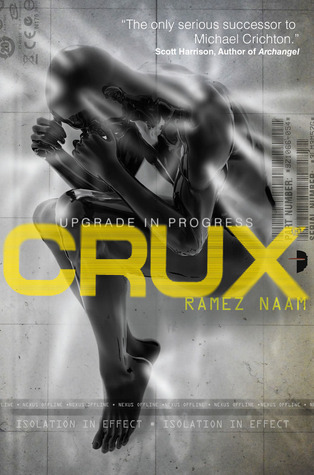 Second in the Nexus series, Crux, by Ramez Naam follows right on the heels of Nexus.  You can see my Nexus review here.

Though it’s been almost a year since I read and reviewed Nexus, I was quite eager to get into the second volume.  Nothing I’ve read in the year since the first book in this series has had such an affect on me.  This is science fiction that is rooted so tightly in today’s science that it feels as though this could be happening now.  And combined with the hard science is the social science of how people relate to one another in this high-tech digital world.

It has been six months since Nexus 5 was released (unleashed?) to the world and a new generation of what can only be called ‘post-humans’ has begun.  Terrorists have found a way to use the software/drug to turn people into walking bombs and have targeted the U.S. President.  The CIA and terrorists are hunting down the Nexus creators, Kade and Feng, aware that a backdoor into the Nexus mind was built in and they are wanting to exploit it.

Samantha Cataranes, another member of the Nexus team, is living with a group of children were born with the Nexus already inside of them.  She, too, will have to fend off those looking to exploit the controlling potentials of the drug.

The book is full of action and really this is a thriller first, and a sci-fi adventure second.  The constant chase and fight and torture, physical and mental, really moves this book.  And if, by chance, there isn’t one of those three actions, there is the fear of one of them.  Naam writes this thriller style quite well and it is because of this that I kept turning the pages.  I was also still quite fascinated by the software nature of this drug and how the potential for this sort of thing is so very possible.

What I didn’t feel here, was a connection to the characters.  I note that I didn’t talk about this in my review of the first book, meaning that there wasn’t a connection strong enough to discuss, but it also wasn’t missing.  Here, however, the plot really relies on our having a connection to Kade, Feng, and Cataranes strong enough that we care about what is happening.  Nexus 5 already exists now, so we’re not in a frenzy wondering about it.  Instead, we’re focused on those who created it, and their safety.  But without a reader bond to the characters we lose this one important aspect of the story.

Make no mistake … there is still a lot of thrilling action here and the concept of this technologically evolved drug is still highly original. But it could be just that much more thrilling if we had a little more emotional attachment to the characters.

Looking for a good book? Ramex Naam’s Crux, a follow up to his thriller Nexus, is just as exciting as the first book and will take the reader on a real thrill ride that is terrifying and gripping.