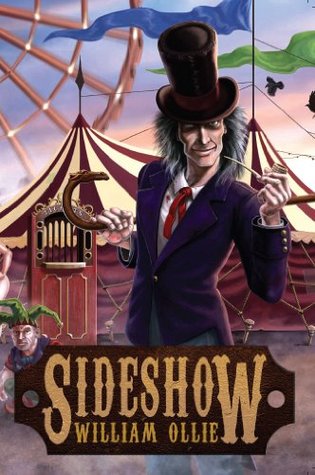 Although many readers are familiar with names like Stephen King or Peter Straub, or even H. P. Lovecraft, writing a novel-length horror tale is no easy task.  Sustaining a high level of horror or fear through the development of a plot and the establishing of characters is tricky and it’s easy to lose the horror when building the story.  Author William Ollie manages to keep a strong sense of mystery and horror throughout his book, Sideshow.

Thirteen year old boys Justin and Mickey observe a carnival sprout up in a field near town.  “Sprout” might be the operative term here as it doesn’t just go up in stages, like most carnivals, but rather seems to grow.  Aside from the strange way that the carnival appears, the carnival is also unusual in that it isn’t set up in the usual place that the annual carnival usually sets up.  Instead, it is set up in a field where atrocities once occurred by some of the city’s leading citizens decades ago.

The adults of the town investigate the appearance of the strange carnival, but quickly become enthralled with Hannibal Cobb, the carnival’s magician, and all that he brings to them.  But their secrets are not so secret, and Cobb will show them some unkind truths.

Author William Ollie does a very nice job of establishing a mood (so important in good horror fiction).  The carnival is so fully defined that one can almost smell the corn dogs.  And yet he’s also built in an air of mystery surrounding the show.

The characters are slightly less well-defined, though the use of teenage boys to observe the happenings is a nice touch (typically teenage protagonists would make this a Young Adult novel, which this most certainly is not).  The writing itself is smooth and Ollie grabs your attention and holds on to it throughout the book.

Looking for a good book?  If you like fiction that keeps you on edge and terrifies you a bit, then Sideshow, by William Ollie is probably just the right book for you.