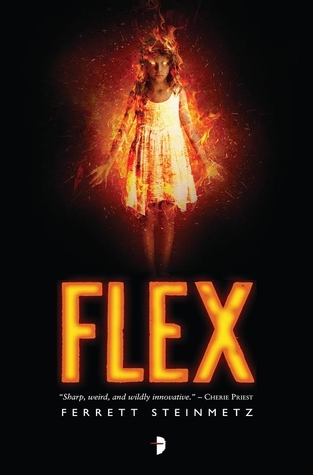 What if crystal meth actually managed to give the user an incredible power and not just made the user think they had a power?  What if magic could be obtained through drug use?  Flex, by Ferrett Steinmetz takes on these issues and creates a powerful story that spends its time with some future low-life types.

Magic can be used by certain individuals, typically through drug use.  And like most illicit drug use, it can be risky.  Take, for example, this moment from the book:

Then he felt the Flex

It was a lower-grade Flex that gave him an instant headache — there was something migraine-inducing in that ‘mancy, a fingers-on-chalkboard interference pattern that battered Paul’s beliefs.  Flux boiled around the reedy gun-kid in toxic clouds.  He was a thunderhead, ready to explode.

The book is interesting and action-packed, but what works here is not so much the idea behind Flex (I’ll come back to this in a moment), but the chief characters, Paul and Aliyah.  Understanding what a parent would (or wouldn’t) do for a child is the point that comes across very clearly, in this future.  Sometimes this comes across a little too hard.  At one point I mentally shouted, “I get it already … you’re concerned about the girl!”  But it’s this relationship that moves the story forward and kept me interested.

As to the idea behind ‘Flex.’  Yes…an interesting, novel concept.  Magic by  drugs.  Unfortunately for Flex and author Ferrett Steinmetz, as I began this book I was just finishing another sci-fi tome that featured a variation of drug use, Nexus.  There was more than a little confusion, on my part early one when I was reading both, and I came across the ‘ex’ sound and knew I was dealing with a drug.  I had to put Flex down and come back to it after reading something else, but since I raved about Nexus, Flex comes in as the unfortunate, bastard step-child of sci-fi drug books.  Why?  Because there really isn’t much story here amidst the action.

There’s a lot of action and a lot of ‘mancy (WAYYYYY too much ” ‘mancy” in this book) and the ending was by no means a surprise to me (again, I mentally spoke “Who didn’t see that coming?” as I got to the story climax).  But what happens in this action?  Paul uses his ‘mancy to complete bureaucratic paperwork, despite the fact that ‘mancy is illegal.  But Paul has a gift for it and keeps it simple.  But when he tries to heal his burned daughter, he has to go underground, to the world of Flex dealers and users, and if he’s caught he faces a complete brain-wipe.

I enjoyed the inventiveness of magic-by-drug and I enjoyed the very real characterizations of Paul and his daughter.  But the writing itself could have used a slightly stronger editing hand to tighten the language and kept the focus on the story.

Looking for a good book?  Flex, by Ferrett Steinmetz, is a dark novel that combines science fiction with fantasy quite seamlessly, is full of action, yet moves a bit slowly in terms of story-telling.