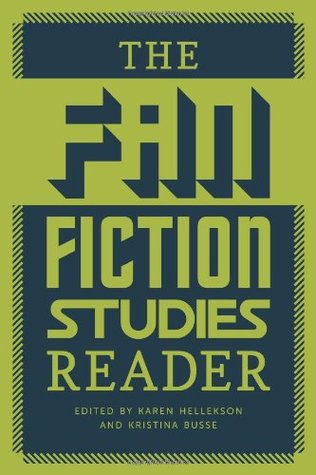 Fan Fiction seems to have become its own genre, with critical studies examining the genre.  This book, The Fan Fiction Studies Reader, edited by Karen Hellekson and Kristina Busse is such an examination.

I have been familiar with ‘fan fiction’ since the late 1970’s — before it had a specific label as ‘fan fiction.’  My own introduction to the form was through the television show, Star Trek.  Not surprisingly, the bulk of the articles in this book also deal with Star Trek related fiction.  In some ways, that’s a bit of a problem.  Fan fiction has become so much larger than a bunch of Star Trek nerds writing about their favorite characters.  It has become more than a means to write pornography using familiar characters.  This book might have done itself a favor and labelled it “Volume 1” as there are clearly many more essays about a wide variety of media and characters that fans write about.

But…speaking specifically to this book, I will admit that I was enlightened and learned a few things.  Granted, I’m not deeply ensconced in fan fiction myself (not since the late 80’s), but I did learn what a Mary-Sue story is (and that I’ve never liked them).

The editors wrote (almost at length) between each essay, to set up the topic that the essay would address.  Some of their comments were as enlightening as the included essay.  In Part 3, “Fan Communities and Affect” they put in to writing something I’ve long felt was true:

…watching the Super Bowl or going to the theater or collecting stamps, all fannish activities in their own right.  Yet fans of popular culture are often dismissed … and media fans in particular are frequently represented as displaying unhealthy, obsessive, even pathological behavior….

I think that the internet and social media have changed this a bit … when it’s easy to find people who share the same passion as you, it’s easier to feel comfortable expressing fannish behavior.  Take a look at the growth of things like ‘cosplay’ as an example.

One aspect of fan fiction that is addressed, which I am aware of but have never been interested in reading, is what is called ‘slash’ fiction.  This has typically been identified through Kirk/Spock (read “Kirk slash Spock”) stories in which there is a sexual relationship between the two male figures (I hesitate to refer to it as a homosexual relationship for reasons identified in at least one of the essays).  Kirk/Spock is not the only slash fiction in fan fiction.  Another popular slash is Xenia/Gabrielle, and there are countless others as well.

While I’ve never been drawn to read this sort of fiction, it’s a personal taste.   I took issue with a comment in Chapter 9, “Future Men” by Constance Penley when she writes:

… The Trekkers have had to struggle mightily, however, to find the right language to deride and dismiss the slashers.  After all, Trekdom is a culture that believes itself superior to the rest of the U.S. society in the strength of its allegiance to the values of democratic equality and tolerance for differences.

I can’t help but wonder where this statement comes from.  There are eleven footnotes in this article, but nothing to state where the generalization that Trekkers want to deride and dismiss ‘slashers’ comes from or where the data comes from to identify the statement that Trekkers believe themselves superior to the rest of U.S. society in any thing.  She goes on to write:

The slash version of Star Trek threatens the Trekkers because it is not only sexually but politically scary, with its overt homoeroticism throwing into sharp relief the usually invisible homosocial underpinnings of Trekdom, the Federation, and U.S. culture.

I just don’t understand how the author comes to these conclusions.  Slash fiction has gotten a fair amount of attention because it’s out of the ordinary (though with sexual fiction hitting the ‘big time’ [ie: Fifty Shades of Grey] it’s no longer such a fringe element), and if there’s a movement from within fandom against it, it’s more likely because fans already get derided (see the first quote I used from the book) by non-fans and they (we) don’t need to add to it for something they (we) don’t participate in.  “Threatened?”   I don’t think so.  I can’t say that I’ve ever met a Star Trek fan who was “threatened” by slash fiction (if they were even aware of it).  I wouldn’t deny that Trekkers make up as diverse a cross-section of individuals as any other fannish activity and that there could well be individuals who would react in such a way, but I truly can’t believe that this generalization of Constance Penley’s reflects a majority as her writing implies.  This was really a remarkable, negative generalization.

In theatre, there’s a value to revising the same text in order to explore different aspects and play out different behavioral strips; similarly, in television, we don’t mind tuning in week after week to see the same characters in entirely different stories. We don’t mind new versions of Hamlet the way we don’t mind new episodes of Star Trek. We don’t say, “Oh, Star Trek again? We had Star Trek last week!” We don’t mind if Kirk and Spock visit—as they did on the aired series—a planet based on Roman gladiator culture, or Native American culture, or America during the Great Depression. Most people happily watch televised repeats—identical replayings of dramatic action. How much more interesting would different performances of the same scripts be if the actors and directors explored the limitations of the text and tried to elicit different readings, different embodied meanings? And because fan fiction is an amateur production accountable to no market forces, it allows for radical reimaginings: plots, themes, and endings that would never be permitted on network television. One could imagine Star Trek by David Lynch, Star Trek by Stanley Kubrick, Star Trek by Woody Allen—and what I’m getting at here is that that’s what fan fiction is.

This actually sounds exciting, and gets to the root of fan fiction in a way that I hadn’t thought about before.  She begins her final paragraph (which concludes the book as well) with an almost perfect analogy:

I believe that fandom is community theatre in a mass media world; fandom is what happened to the culture of amateur dramatics. In the days before television, people often made theatre in their homes, for fun, and in fandom, we still make theatre together, for fun, except we cast the play from our televisions sets. Theatre—actual, three-dimensional theatre that moves bodies in space—is expensive and requires tremendous social capital…

I didn’t agree with every essay in the book, and some I thought were perhaps a little dated, but over-all I really liked that there are critical essays on the genre of fan fiction (even if it is likened to community theatre) and I hope that there will be more, addressing a wider range of media fandom.

Looking for a good book?  The Fan Fiction Studies Reader is a worthy collection of critical essays on fan fiction; perfect for anyone interested in knowing more about what fan fiction is, as well as for those who are already reading such.