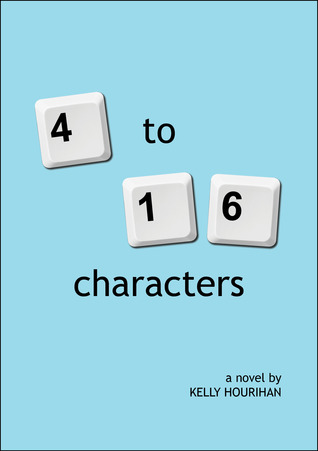 I liked the idea of writing a YA book in a way that YA readers could relate to it.  This book is written as though its main characters were communicating through various social media sources (though oddly enough NOT through a Twitter-type account which would be most in line with the 4-16 characters of the title).  But, what makes me feel old, is that it wasn’t enough to use the social media venue for communicating in the book, author Hourihan also wrote the communication complete with teenage misspellings and abbreviations, making it a very difficult, slow-going read for some such as myself.

As someone who is a bit of a speed-reader, anything that makes the reading difficult, or slows me down, mostly becomes annoying.  I will slow down automatically when something becomes fiercely fascinating or engaging.  But to be slowed down and not be captivated doesn’t bode well.

Going in to this, I expected some ‘high drama’ and family issues.  That’s par for the course in YA.  And while both were present, neither was particularly well-developed.

Early on I was drawn to the main character because of her passion for writing fanfic.  I can relate to this, and I suspect that there are many youngsters out there who would feel the same.  (I wasn’t understanding the made-up world that the girl was writing her fiction about, however.)  The passion and the dreams that a young fanfic writer has, was very plausible.

I also liked the girl’s ‘voice’ when she was dealing with the unwanted psychologists/therapists (remember…high drama and family issues).  The wall she put up, full of sarcasm and bite was well done and sometimes worthy of applause.

There are SO many emails and fan-room postings and plenty of ‘screw my school’ attitude moments, but the story doesn’t build.  Our subject starts at a particular plateau and stays there until (WARNING — POTENTIAL SPOILER) her father makes the effort to be there for her and they support a friend at an unusual sporting event.

It’s HER story, and yet its her father that makes the change.  It is HE that grows through the course of the book.

I feel that I was really receptive to this, and even early on, attracted to the central character’s personality.  But because nothing really happens, it felt much too long and dull.

Looking for a good book?  4 to 16 Characters tries to be topical and edgy but can’t rise above average social media-style story-telling.